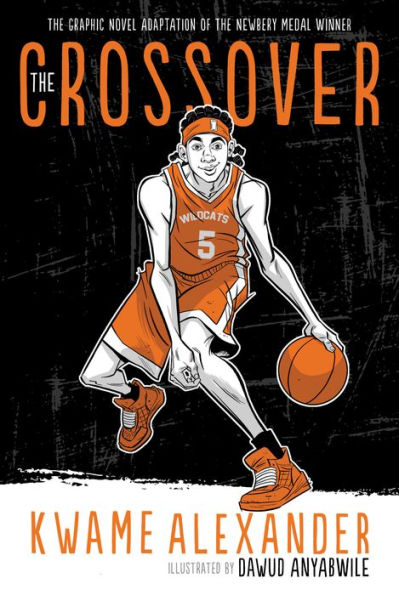 "The sky is your limit, sons. Always shoot for the sun and you will shine,” Chuck “Da Man” Bell. —The Crossover (Graphic Novel)

Twelve-year-old Josh and his twin JB Bell are the kings of the basketball court. Untouchable and unstoppable—the sons of former professional basketball player Chuck “Da Man” Bell couldn’t be anything less than excellent. But when Alexis walks into the twins’ lives and steals JB’s heart, Josh is left without his best friend by his side. Meanwhile, the boys’ father’s health is on the decline, despite Chuck’s utter denial. Josh and JB must deal with the consequences of everyone’s actions—including their own.

The illustrations in the graphic novel, The Crossover, bring the story to life. Illustrator Dawud Anyabwile’s comic book style illustrations match the high-pace action of the novel, especially during the basketball scenes. Most of the illustrations are in black and white with detailed shading, but Anyabwile frequently utilizes orange to help features pop off the page. The text changes in size and shape which helps to capture the rhythm of the poem. Even though this is a graphic novel, the poetic language makes The Crossover a good choice to read aloud.

The pages vary in the amount of text and pictures. Some pages have full-bodied scenes with a few sentences, while others have smaller pictures with mostly narration or dialogue. Alexander’s free-verse poetry moves very well and, thus, lends itself to these variations in page styles. The text placement only serves to emphasize parts of the story. Even though the graphic novel has some difficult vocabulary, the words are often defined and the repetition of the words allows the reader to understand the term. Readers will learn new vocabulary, but the more advanced vocabulary is balanced with realistic dialogue and trash talk during the basketball scenes.

The words themselves rarely vary from the original book, though the verse orientation on the page serves to emphasize different phrases. Those who have read the original text will still find that the graphic novel conveys characters’ moods and personalities in different ways due to the addition of illustrations. Josh, JB, and their friends and family are all vibrant characters and the pictures give them new life and add to the reading experience.

The Crossover was already a moving story, but the story benefits greatly from the addition of illustrations. The illustrations enhance the characters’ emotions and the story’s stakes feel heightened. The story speaks truths about grief, love, and basketball, and the pictures serve to bring those wonderful themes to another dimension. Newcomers and fans of the original story will find this edition to be a worthy addition to their shelves.

"The sky is your limit, sons. Always shoot for the sun and you will shine,” Chuck “Da Man” Bell. —The Crossover (Graphic Novel)