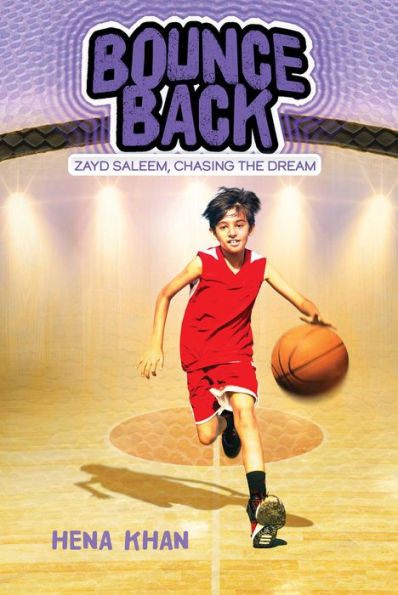 Zayd has been working hard to prove that he can lead his team to the playoffs. When he injures his ankle, he’s forced to watch from the sidelines. Zayd feels as if his basketball dreams will never come true.  As Zayd watches from the bench, he struggles to figure out what his role is. Should he give his teammates advice or just cheer from the sidelines?

Zayd’s story focuses on Zayd’s basketball team as well as his Uncle Jamal’s upcoming wedding. The story shows basketball action and Zayd’s family life. Bounce Back gives readers a glimpse into the life of a large Pakistani family. Every member of Zayd’s family helps with Jamal’s wedding plans, and Zayd discovers that helping choreograph a dance is much like coaching basketball.

Bounce Back has less basketball action and focuses more on the changing dynamics of Zayd’s family. His father has a minor heart attack and has a difficult time finding the energy to exercise. Zayd and his sister think of a clever way to get their grandfather up and moving. The strong family bonds shine through and give the story more depth.

Even though Zayd cannot play, his parents make him support his team by attending practices and games. Zayd struggles with feeling jealous when he watches someone play in his position. Zayd says, “You don’t know how horrible it feels to sit there and watch and not play.” Despite the feelings of jealousy, in the end, Zayd learns the importance of helping his team despite his injury. Zayd’s coach is also portrayed in a positive light and leads his team to the playoffs without screaming or demeaning the players.

Readers can enjoy Bounce Back even if they have not read the previous books in the series. The easy-to-follow plot will engage readers. Zayd is a likable, relatable character that tells his story with humor and honesty. Bounce Back teaches the importance of helping others, even if it is from the sidelines. Some readers who enjoyed the Zayd Saleem, Chasing the Dream Series may also want to read The Contract Series by Derek Jeter.