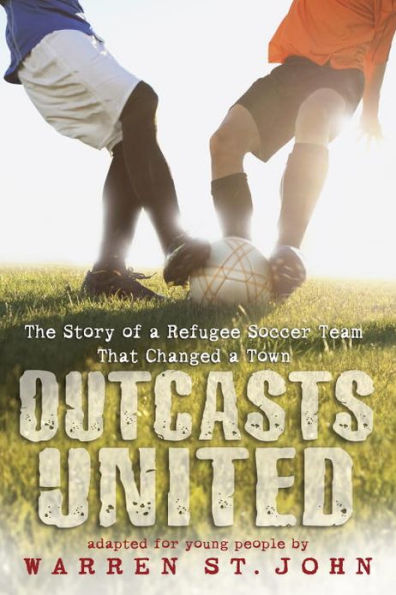 “[Luma] said we’re all foreigners, and this is a team where everybody unites. . . And she told us she was going to kick us off the team if we didn’t,” Yousph Woldeyesus. —Outcasts United

In the 1990s, the small town of Clarkston, Georgia, became the center for refugee resettlement. The United States government didn’t tell the original residents that soon people from war-torn nations would be settling in the area and trying to navigate a world vastly different than the homes they had come from. When an American-educated, Jordanian woman named Luma Mufleh moves in, she starts a soccer team comprised of refugee kids, hoping to keep them off the streets. They dub themselves “The Fugees.”

Outcasts United tells the true story of one of the Fugees’ seasons, led by dedicated coach Luma. Reporter Warren St. John details the lives of the players and their coach on and off the field as they maneuver through their lives in a town that didn’t see them coming. Their story demonstrates shared humanity and the need for compassion.

Much of the book revolves around Luma’s life. Luma’s old-school coaching methods produce results in her players. St. John captures how much Luma’s players valued her, as she is much more than just a coach to them. Luma consistently helps the boys’ families with daily tasks, especially when English isn’t well-spoken or understood in the households. Despite her tough-love approach to coaching, the players see her as a mentor and someone to be admired.

The boys face serious challenges in their lives, but soccer unites them as brothers. Many of them come from rival nations that carry their own prejudices against each other, and the small southern town in Georgia they now live in certainly carries its own prejudices about the refugees. Despite these differences, Clarkston is a global community. Luma forces the boys to get along or get off the field, and the strategy in unifying Clarkson is not much different – they have to make the situation work. There is no other option.

The sense of community in Outcasts United is striking. Community is built from the ground up, and it requires that everyone makes an attempt to work within it. Luma has built a community through soccer, and the Fugees family still exists today with more teams and schooling opportunities. Luma could not have done this work without compassion—compassion for the refugee families in Clarkson and for the community that they were trying to build. Through that compassion and through soccer, they have created something truly beautiful.

Outcasts United is inspiring because of the work that Luma and her Fugees put forth. Despite their trials, they’re a team that wants nothing more than to live their lives and play soccer. Although soccer fans will be the main target audience of this book, this true story is moving for anyone interested in themes of compassion and community through sports.

“[Luma] said we’re all foreigners, and this is a team where everybody unites. . . And she told us she was going to kick us off the team if we didn’t,” Yousph Woldeyesus. —Outcasts United