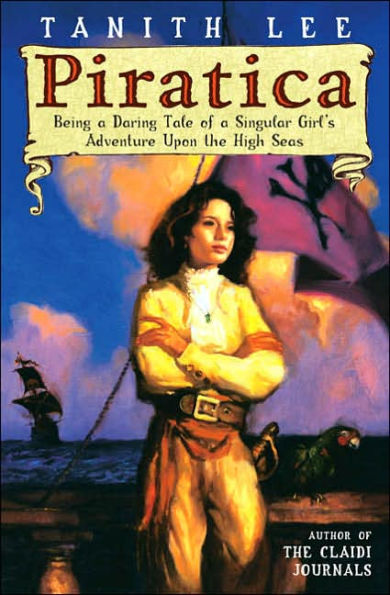 “My mother, sir, was a Queen of the Seas. She was a Pirate Empress, with a fleet of twenty ships.” Art – Piratica

Art attends a school for proper young ladies. That is, until she bumps her head and remembers her long-forgotten past. Her mother was Piratica, a pirate queen, and Art grew up on her mother’s pirate ship. Art lost her memory not in a mundane accident, but from an exploding pirate ship that claimed her mother’s life! Now that she remembers where she came from, Art quickly takes on her mother’s mantel and runs away to find her mom’s old pirate crew.

Felix was already down on his luck when an unfortunate run-in with Art leaves people thinking he is a famous highway robber. Unable to convince the law that he is innocent, Felix is forced to flee for his life. He ends up on Art’s pirate ship, where he is courteously imprisoned. The pirates promise he will be put ashore when they are far enough from London that he cannot turn the pirates into the law. However, as their adventures continue, Felix finds his utter distaste for pirates warring with a growing admiration for Art’s fearlessness.

Piratica honors bravery, loyalty, and a bit of pirate flair. Art is an inspiring character, who is not immune to doubt, but she is unwilling to let it slow her down for a moment. Determined to will her dream of becoming a pirate into reality, her pirate crew cannot help but be swept along by her vision. With a delightful cast of well-developed supporting characters, every scene carries readers along this swashbuckling tale.

Full of fun, adventure, and a healthy helping of piratical ridiculousness, Piratica is a must-read for anyone who loves adventure, pirates, or strong female characters. The silliness is over-the-top, yet remains believable and thoroughly enjoyable. With plenty of action but not much gore, this is an excellent story for readers looking for more exciting adventures who aren’t mature enough for adult content.

“My mother, sir, was a Queen of the Seas. She was a Pirate Empress, with a fleet of twenty ships.” Art – Piratica