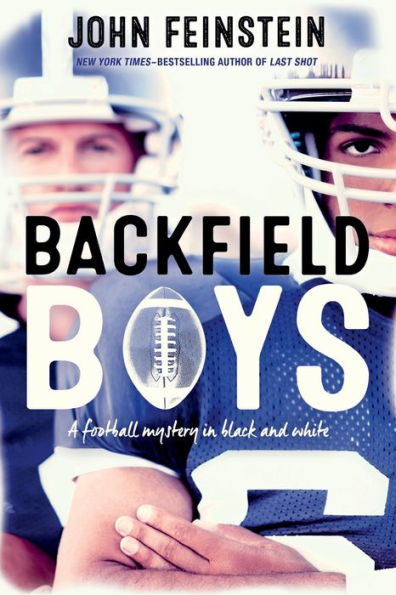 “The two black kids and the two white kids. The two Southerners and the two New Yorkers. All celebrating, as one.” —Backfield Boys

Backfield Boys: A Football Mystery in Black and White

Jason and Tom are two best friends from New York who love to play football. They are stoked when they are accepted to Thomas Gatch Prep (TGP), a private boarding school in Virginia created specifically for athletes. After their first week of practice, Jason, who is white, expects to be placed as a wide receiver because of his speed. Tom, who is black, expects to be placed as a quarterback because of his strong arm and accuracy. But when Jason is assigned as a quarterback and Tom is assigned as a wide receiver, the boys start to suspect racial bias. As the year progresses, Tom and Jason, along with their roommates Billy Bob and Anthony, start to notice deep-seated racism in the school.

Tom and Jason discover that there have been zero African Americans that have played as quarterbacks at TGP. Determined to expose the racism at the school, Tom and Jason enlist the help of two reporters: Teel and Robinson. These two reporters have already heard about the underlying racism at TGP, but they’ve never had enough evidence to prove it. As the football season gets underway, Tom and Jason gather more evidence of racism. Tom is never put in any of the games. All of the students were assigned roommates, and there are no interracial rooms. One of the biggest stories they find is that Mr. Gatch, founder of TGP, invited a former KKK grand wizard to speak at a school he worked at thirty years ago. The boys are stunned that the founder of their school has ties to the KKK, but it’s still not enough of a story for Teel and Robinson to publish.

In addition to attempting to expose the racism in the school, Tom, Jason, Anthony, and Billy Bob deal with the everyday pressures of high school, including deciding on who to take to the school dance. Fortunately, Billy Bob uses his southern charm to win over a group of senior girls, providing himself and his friends dates. Their big news break occurs at the school dance. The dance is going well until Mr. Gatch yells at Tom and Anthony for dancing with their dates, who are white. His explosion lands him and his school in the public eye.

A couple of weeks later, the head football coach, Coach Johnson, calls a meeting, but only the white coaches are invited. Coach Johnson announces he is leaving and the new head coach is a black man, which causes uproar. Coach Johnson says, “We all have to make sacrifices in today’s world. Bad enough we had to put up with a black president in this country.” The meeting is further evidence of racism and when the media hears a recording of the meeting, the story explodes in the media. The school is split into those who support Coach Johnson and those who don’t.

There are underlying real-world, political elements in Backfield Boys. Trump is referenced a few times. For example, Tom, Jason, Anthony, and Billy Bob sit with their friend Juan del Potro and other Hispanic students at lunch. Tom comments, “Donald Trump would not like our table.” Juan adds, “He’d want a wall down the middle of it.” After the story of the coaches’ meeting is published, “Fox News was having what felt like a field day with the story, the issue to them being that the United States was being destroyed by ‘chronic political correctness.’” The main characters are obviously not supporters of Trump and have no reserves about expressing their political and religious opinions.

Backfield Boys describes, in detail, many football games, which will satisfy football fans. Tom and Jason always know which plays will work best, which is unrealistic since this is their first year playing football. Tom, Jason, Anthony, and Billy Bob don’t have any flaws and are always presented in a positive light, which makes them unrealistic characters. They are extremely mature and witty for their age, providing the book with good humor. They are admirable in that they could have chosen to just leave TGP, but they decided to stay and work towards exposing the racism in the school. The story drags at times, and the climax comes at the very end. Backfield Boys is about football, but it is also about underlying racism that still exists in sports today.

“The two black kids and the two white kids. The two Southerners and the two New Yorkers. All celebrating, as one.” —Backfield Boys