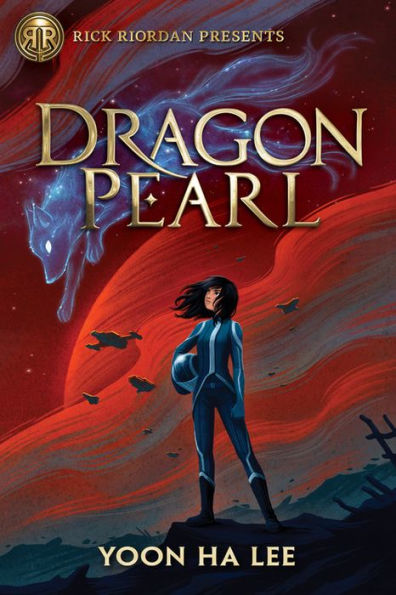 “A small voice in my head suggested that I stop relying on my magic to solve problems for me, because at some point all of this was going to catch up to me in a bad way,” Min. —Dragon Pearl

Thirteen-year-old Min lives an ordinary life. No one knows that her family comes from a long line of fox spirits. Her family hides their powers, and Min’s mother doesn’t allow any of them to use fox-magic. Instead of shape-shifting and using Charm, Min always appears as a human.

Min dreams of leaving her dust-ridden planet and joining her brother Jun in the Space Forces. When Min gets older, they hope to see more of the Thousand Worlds together. Then an investigator appears and informs the family that Jun has deserted. The investigator thinks Jun is searching for the mythical Dragon Pearl that is rumored to have tremendous power.

After reading a strange message from Jun, Min knows that something is wrong. Min runs away to search for her brother. During her journey, she will meet gamblers, pirates, and ghosts. She will have to use deception, sabotage, and magic. Min will need all of her courage to complete her journey. Will she be able to find the answers she needs to find her brother?

Sci-fi enthusiasts will enter an imaginative world that includes Korean mythology. The Korean mythology is seamlessly integrated into Min’s story and helps create an interesting world. The story is a perfect blend of mystery, action, and space travel. Although most of the story is fast-paced, parts of the story are difficult to read because of long descriptions.

Dragon Pearl is told from Min’s point of view, which allows the reader to understand her thought process as she searches for her brother. Middle school readers will enjoy reading about Min because of her daring actions and can-do attitude.

Although Min has spent her life hiding her magical abilities, once she leaves her house, she consistently relies on Charm. Readers may question how she can be so skilled using her Charm when she has had no practice. Another bothersome inconsistency is that Min notices when other supernaturals use their powers, but no one notices when Min uses her Charm. Even though Min uses her Charm to deceive others, she is still a likable character. At the end of the book, Min realizes that she should rely less on magic, but it would have been nice to see Min use her brain to solve some problems throughout the story, instead of always using Charm.

The ending is a little predictable, but there are enough surprises to satisfy readers. Middle school readers who are interested in mythology may want to begin with the Percy Jackson Series or Aru Shah and the End of Time, which have better character development as well as humor. Overall, Dragon Pearl creates an interesting world filled with magic. The danger, magic, and mystery will draw readers into the story and keep them engaged. However, some readers may struggle with the long descriptions and difficult vocabulary.

“A small voice in my head suggested that I stop relying on my magic to solve problems for me, because at some point all of this was going to catch up to me in a bad way,” Min. —Dragon Pearl