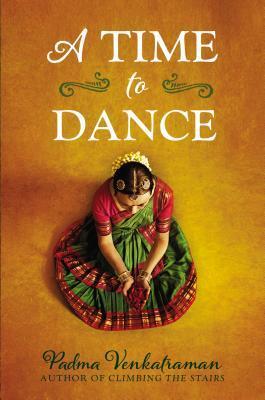 “Some dancers thrill audiences with exotic poses and excessive speed. I think you should care more about entering people’s hearts and elevating their souls than about entertaining their minds,” Govinda. –A Time to Dance

A Time to Dance

Veda, a classical dance prodigy in India, lives and breathes dance—so when an accident leaves her a below-knee amputee, her dreams are shattered. For a girl who’s grown used to receiving applause for her dance prowess and flexibility, adjusting to a prosthetic leg is painful and humbling. But Veda refuses to let her disability rob her of her dreams, and she starts all over again, taking beginner classes with the youngest dancers. Then Veda meets Govinda, a young man who approaches dance as a spiritual pursuit. As their relationship deepens, Veda reconnects with the world around her and begins to discover who she is and what dance truly means to her.

First and foremost, Veda is a likable teenager who deals with many types of normal teenage problems including conflicts with her parents and friends, crushes, insecurities, as well as the loss of her leg. Readers will connect with Veda because she is an imperfect teen who feels an array of emotions. Throughout her journey, Veda refuses to give up. Despite the loss of her leg, she is determined to continue Bharatanatyam dance. For Veda, dance is “a sacred art, an offering of devotion to God.” When Veda wrestles with the way her disability affects her dancing, her grandmother tells her, “There are as many perfect poses as there are people. . . Shiva sees perfection in every sincere effort. He loves us despite—or maybe because of—our differences.”

When Veda is learning how to use her prosthetic limb, the story skips past the difficulties of learning how to use the prosthetic as well the other physical ailments. Instead of explaining the difficulties, Veda’s time with the doctor is spent describing her infatuation with him. To learn more about how amputation can affect an athlete, The Running Dream by Wendelin Van Draanen is an engaging story that can give you more insight.

A Time to Dance is written in beautiful verse that magnifies emotions and conflicts but is never confusing. The inspirational story shows Veda’s courage, perseverance, and the importance of personal growth. A Time to Dance is an entertaining story that contains positive life lessons and teaches readers about Veda’s traditions, culture, and religion.

“Some dancers thrill audiences with exotic poses and excessive speed. I think you should care more about entering people’s hearts and elevating their souls than about entertaining their minds,” Govinda. –A Time to Dance