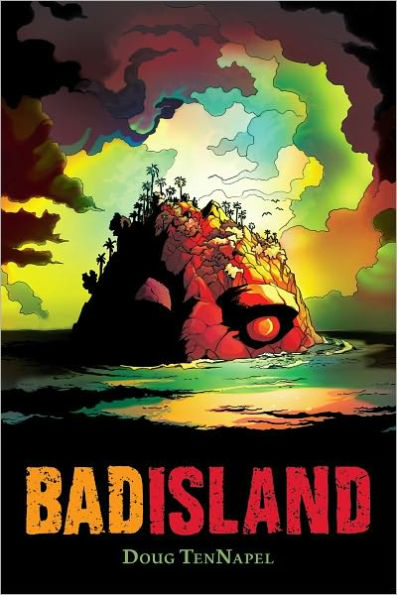 “Why can’t you just be a normal dad and neglect me?” Reese. –Bad Island

Reese doesn’t want to go on a boating trip with his family. He doesn’t understand why he can’t just stay home alone. When the family heads out to sea, a surprise storm wrecks their ship, and they end up on a strange island. The island has weird plants, weirder animals, and lethal inhabitants.

The castaways must find a way to escape the island’s inhabitants. But they have few resources, and there are strange creatures swarming the island. When the family finds an artifact, they follow the clues trying to unlock the island’s secrets. Is there any way Reese and his family can survive on this bad island?

Bad Island is an action-packed story that combines two stories. Giant aliens are at war with another empire, and some of the aliens eventually come to Earth. The family, who just wanted to take a boating trip, ends up on the same island with the aliens. The beginning of the story is a bit confusing because the illustrations have very little text to explain the alien conflict. More information about the aliens, the war, and the conflict would have been helpful. Even though the story and the characters are underdeveloped, Bad Island still has many positive aspects.

The comic style illustrations bring the bad island’s creepy inhabitants to life. Much of the fighting is illustrated in kid-friendly pictures and contains bold onomatopoeias such as “Fling! Blaaarrr! Swack! Chomp! Whomp!” The action-packed sequences and character’s expressions give the story an added depth of emotion. As the book weaves the two stories together, the readers will see the parallels between the stories that focus on the father and son relationship.

Younger readers will be drawn to Bad Island because of the amazing illustrations, and they will also relate to the characters in the story. Anyone who has an annoying little sister will have empathy for Reese, who has to try to save his sister even while she drives him crazy. The story clearly shows the importance of family love. Bad Island contains little bits of text scattered throughout the story, a simple plot, and a positive message that is perfect for younger readers who are reluctant to dive into books.

“Why can’t you just be a normal dad and neglect me?” Reese. –Bad Island