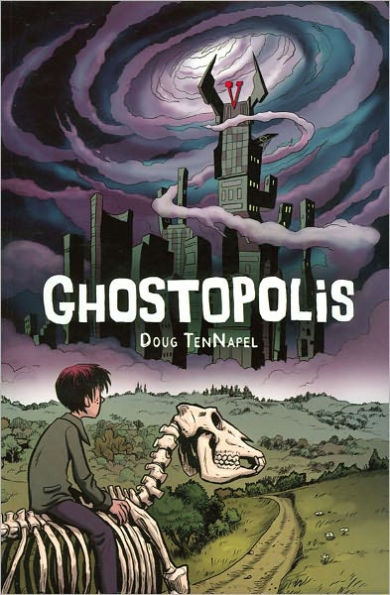 “You don’t have to repeat our mistakes. Being an idiot isn’t cast in stone,” Grandpa. –Ghostopolis

Garth Hale is going to die, but he is still surprised when he is accidentally zapped into the ghost world by Frank Gallows, a washed-up Ghost wrangler. Frank doesn’t believe in himself, but he’s determined to fix his mistake and bring Garth home. But getting Garth home isn’t going to be easy. The power-hungry, evil ruler of Ghostopolis wants to trap Garth. With Garth under his control, the evil ruler can tighten his grip on the spirit world. While in the ghost world, Garth meets his grandfather, who promises to help Garth return home. With the help of a bone horse, his grandfather, Frank Gallows and others, Garth may just find a way out of the ghost world.

TenNapel creates a complex, interesting ghost world using comic-style illustrations that do an exceptional job showing the character’s emotions. Younger readers will enjoy the many multi-paged, action-packed panels that contain onomatopoeias like “shink, hack, putt, snuff.” The story contains surprising pockets of humor that will make the reader laugh out loud. However, many younger readers may not understand the historical reference to Benedict Arnold, which adds to the story’s humor.

The plot is not necessarily original, but the ghost world does have frightening, fantastic creatures. Integrated into the plot are lessons about not giving up, using your imagination, as well as the fact that children do not need to make the same mistakes as their parents. Garth meets his grandfather, who illustrates the idea that it’s never too late for second chances, even if you’re a ghost.

A man named Joe created Ghostopolis. Joe is similar to Christ, and although he is portrayed in a positive manner, his appearance in the story is random and does nothing to advance the plot. The story does contain a love triangle, and although the relationship happened before the story began, one of the characters comes to realize that, “Love is in the acts, not in the feels.”

Ghostopolis uses a creative story about the afterlife to focus on relationships. Younger readers will enjoy the spooky adventure that allows a boy to be friends with a bone horse. Older readers will appreciate the story as it explores family relationships. Ghostopolis will engage readers because of the easy-to-read text, spooky spirit world, and protagonist that they can root for.

“You don’t have to repeat our mistakes. Being an idiot isn’t cast in stone,” Grandpa. –Ghostopolis