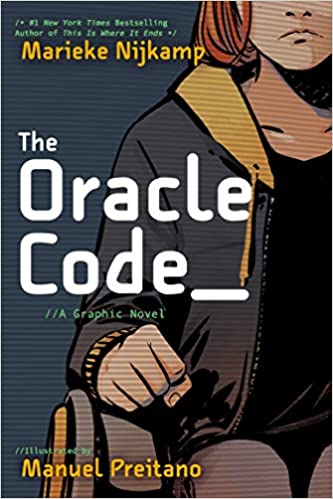 After an accident renders her disabled, teenager Barbara Gordon is sent to the Arkham Center for Independence (A.C.I). She learns to cope with her newfound disability, makes new friends, and processes her trauma. However, there seems to be something more sinister occurring within the rehabilitation center; kids are disappearing, and the doctors are hiding something. Can Barbara solve the mystery behind the facility before she too falls victim to it?

The graphic novel, The Oracle Code is told from Barbara’s point of view, which helps the reader see her character growth and understand the overarching themes of resilience, the importance of friendship, and embracing who you are. The story shows the difficulties of living with a disability, while still emphasizing that having a disability does not make your life less valuable. Barbara’s friend Issy reinforces this theme when she says, “The truth is, no matter what anyone led you to believe, life on wheels isn’t any worse or better than life on both feet, or one foot, or crutches. It’s what you make of it.”

Barbara also learns the importance of letting others help during hard times. While she tries to be as independent as possible, eventually Barbara accepts that it is okay to rely on others and ask for assistance when needed. As she tries to solve the mysteries behind the A.C.I, Barbara calls upon her friends and family, and it is through their teamwork that the puzzle is eventually cracked.

The secret behind the facility is incredibly dark and may be difficult and upsetting to read. The head physical therapist and head psychiatric therapist experiment on the A.C.I patients in order to find more effective treatments and cures. This is done by kidnapping the children whose parents have seemingly abandoned them and erasing any trace of their existence. The therapists then perform torturous experiments in order to “fix” them. The physical therapist even refers to the children he experiments on as “collateral damage.” In the end, Barbara and the rest of the patients within the A.C.I. prove that they don’t need to be “fixed.”

Preitano’s illustrations highlight the emotionally powerful moments with dynamic page compositions and incredible character expressions. The color schemes also help differentiate between flashbacks and the present day. Flashback sequences are illustrated in stark reds, oranges, and yellows. This contrasts the muted colors used in the rest of the graphic novel. Preitano’s use of intense shading also helps intensify the looming dreadful atmosphere of the A.C.I. Despite the excellent illustrations, the dialogue between the characters and Barbara’s internal monologue is still central to the story and ensures each idea is conveyed clearly. In addition, the text is easy to read because it uses simple vocabulary.

The Oracle Code is highly recommended for anyone struggling to come to terms with a disability. Barbara and her friends are excellent role models because they persevere through difficult circumstances and display selflessness by helping each other despite the dangers. In addition, their incredible vulnerability will encourage teens to be more open with their emotions. Plus, the well-written mystery and relatable characters make for an incredibly engaging read.   Overall, The Oracle Code is an excellent graphic novel and a must-read for anyone who loves DC comics or a good mystery.  Fans of DC comics should also read Wonder Woman: Tempest Tossed by Laurie Halse Anderson.