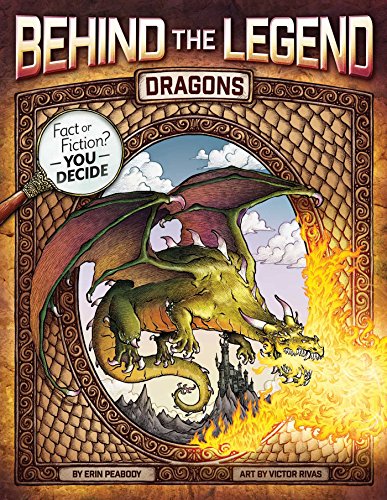 “The dragon teaches you that if you want to climb high, you have to do it against the wind,” Chinese proverb. –Behind the Legend: Dragons

Are giant, fire-breathing dragons real, or just a myth? You decide with this new book in the nonfiction series, Behind the Legend!

Behind the Legend looks at creatures and monsters throughout history and analyzes them through a scientific, myth-busting lens, debating whether the sightings and evidence provided are adequate proof of a creature’s existence. In Behind the Legend: Dragons, readers learn about the sightings and “proof” of dragons from stories throughout history. The authors explore stories of dragons terrorizing towns, the people who claim to have fought dragons—such as St. George—and dives into stories from diverse cultures such as China, Japan, and Mexico. This book discusses additional history about the monster, including how dragons became major figures in popular culture.

If you’re interested in dragons, then Behind the Legend: Dragons is a must-read because of the plethora of facts and stories. Readers will learn about the first dragon poem, Beowulf, as well as many other ancient stories and myths. The black-and-white illustrations show what ancient people thought dragons looked like. Even though Dragons is non-fiction, it is filled with dragon stories from different cultures such as the Incas of Peru. The book explains how some cultures viewed dragons as monsters, while others believed dragons were divine. Peabody concludes with stories of the real-life dragons that still live on earth. At the back of the book, readers will find a list of books that dragon-lovers will want to add to their reading list including Eragon by Christopher Paoline. If you’re looking for more stories that feature dragons, check out Rise of the Dragon Moon by Gabrille K. Byrne, Legends of the Sky by Liz Flanagan, and Dragon Myths by Jenny Mason.

“The dragon teaches you that if you want to climb high, you have to do it against the wind,” Chinese proverb. –Behind the Legend: Dragons