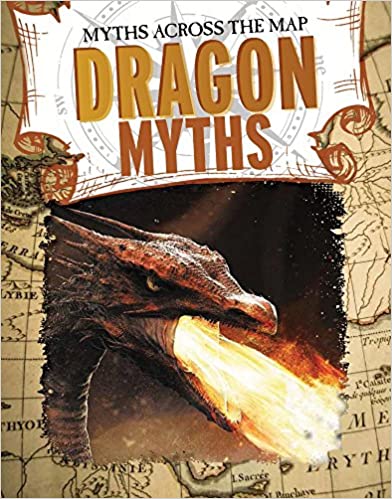 “Primates have had an instinctual fear of snakes, big cats, and birds of prey for millions of years.” –Dragon Myths

Myths Across the Map

They’re called drakon in Greek, azhdaha in Persian, kelekona in Hawaiian, and they have different names in numerous other cultures as well. They’re dragons. Many cultures even agree on what the giant serpents look like, though they may differ on whether these mythical creatures are benevolent or evil. This compelling volume takes readers on a tour of world cultures and dragon lore. Sometimes, the folklore is entwined with actual historical events, such as a Roman general’s supposed encounter with a water-spewing dragon on a march to Africa.

Take a trip back in time and learn how so many myths about dragons became legends. Readers will learn how different cultures preserved their dragon lore as well as why so many people fear dragons. Included in the text are different examples of dragons that have always been warned against. The book has several examples of dragons that are referred to in literature. Readers will also learn why dragons were worshiped, feared, or even considered friendly in ancient civilizations.

Dragon Myths is visually appealing. Each page has large illustrations that include short captions. In addition, each section is broken into smaller sections that have fun headlines such as “SWOOP, SLITHER, SLASH.” Another appealing aspect of the story is the fun facts that appear in a graphic that looks like a scroll. Throughout the book, readers will encounter bolded words that may be unfamiliar; however, the words are defined within the text making the passage easy to understand.

If you want to learn more about dragons, Dragon Myths is the perfect book for you. While none of the myths are covered in detail, the book will spark readers’ curiosity and give them different topics that they may want to research. Full of colorful pictures, interesting facts, and historical information, Dragon Myths will keep readers’ attention as they learn about the dragon lore.

“Primates have had an instinctual fear of snakes, big cats, and birds of prey for millions of years.” –Dragon Myths