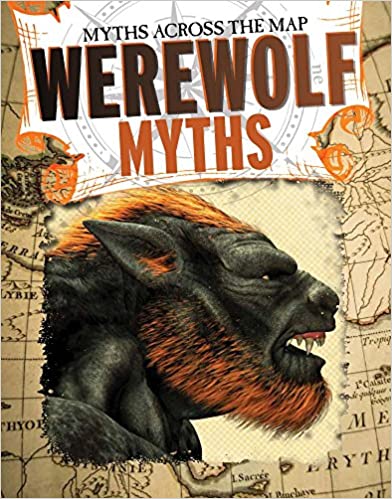 “Myths remind us that humans are capable of both good and evil.” –Werewolf Myths

Myths Across the Map

The werewolf, or lycanthrope, is a human that can take an animal form or an animal that can take human form. Shapeshifters are prevalent in legends across the world, including the Greek minotaur, Celtic selkies, Navajo skin-walkers, and more, dating back to the oldest myths from around the globe. Cave paintings from 25,000 years ago depict images of half-human, half-animal figures. Readers will learn about other cultures’ werewolf beliefs and how these beliefs were shaped. This thrilling volume is full of grisly tales as well as surprising scientific explanations for some werewolf anecdotes.

Werewolf Myths is visually appealing. Each page has large illustrations that include short captions. In addition, each section is broken into smaller sections that have fun headlines such as “Hunt or Be Hunted” and “Puppy Love.” Another appealing aspect of the story is the fun facts that appear in a graphic that looks like a scroll. Throughout the book, readers will encounter bolded words that may be unfamiliar; however, the words are defined within the text, making the passage easy to understand.

Since werewolves represent “humanity’s evil, murderous, dark side” many stories about them are violent and disturbing. The graphic descriptions of werewolves’ behavior and the ways “werewolves” were punished are disturbing. Despite this, the werewolf facts are interesting and refer to ancient myths as well as popular culture. None of the myths are covered in detail which allows the book to cover many interesting topics including movies, diseases, and convicted werewolves from history. Full of colorful pictures, interesting facts, and historical information, Werewolf Myths will entertain readers who want to understand where the legends of werewolves began. Readers who are howling for more werewolf lore should also read Behind the Legend: Werewolves by Erin Peabody. But beware: it’s even more graphic and gory than Werewolf Myths.

“Myths remind us that humans are capable of both good and evil.” –Werewolf Myths