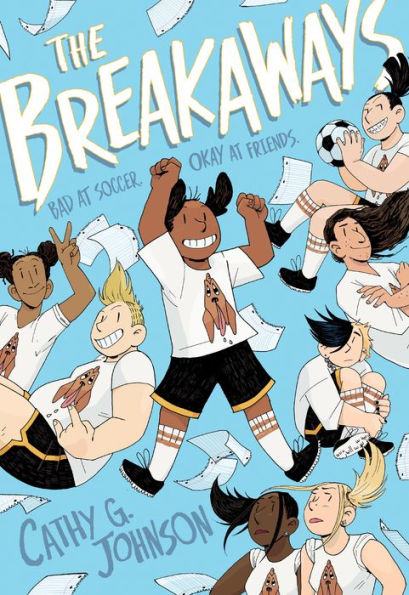 “New things are part of the joy of life. You have to open up to them. Even if it’s difficult,” Sir Mathilde. —The Breakaways

Shy fifth-grader, Faith, has never played soccer. When popular girl, Amanda, invites her to join her soccer team, Faith figures that it’s an opportunity to make friends. There’s just one problem: when Faith arrives at practice, she finds out that Amanda is on the best team, while she is on the C team—the worst team. Faith finds herself stranded on a ragtag team where it seems like no one is interested in playing soccer, and many of the players aren’t interested in being friends with each other.

The Breakaways is a graphic novel that follows Faith and her teammates as they navigate middle school, their relationships, and soccer. The story concept is unique and funny as it is an inversion of the standard sports story. Unlike most sports books, Faith and her teammates aren’t serious about their sports, and they don’t strive to be great. The characters in The Breakaways aren’t good at soccer, but they discover that their friendships don’t rest on wins or losses. Many of the players even bond over their dislike for the sport, showing that their lives are much more than the sport that they play.

The Breakaways has a diverse cast of characters and several characters are LGBTQ+. This includes Faith, who is bisexual, and Sammy, who comes out as trans. There is also an array of cultural differences in the characters. For instance, Yarelis and her mom have a conversation in Spanish, and Nadia wears a hijab. The diverse characters make the story relatable for readers who don’t otherwise feel represented in literature. Johnson creates an inclusive environment for the team and for the readers as well.

Despite the diversity and the fun concept, the book feels too short, as none of the characters have a well-developed individual story. Some characters, like Yarelis, get only a couple of pages, and then their stories stop abruptly. Some pages are dedicated to scenes that aren’t expanded upon. For instance, Faith has daydream sequences where she envisions herself as a young knight on a quest. Although these scenes and the rest of the book are beautifully illustrated, these sequences don’t seem to add anything to the plot and are never really addressed outside Faith’s imagination.

The Breakaways discusses themes of friendship and acceptance through this ragtag soccer team. Despite joining for a variety of reasons, the players come together and try to make their experience fun. Even though the characters’ stories are cut short, the overall message is about learning how to make the best of a bad situation. For a reader searching for an empowering and feel-good book, look no further.

“New things are part of the joy of life. You have to open up to them. Even if it’s difficult,” Sir Mathilde. —The Breakaways