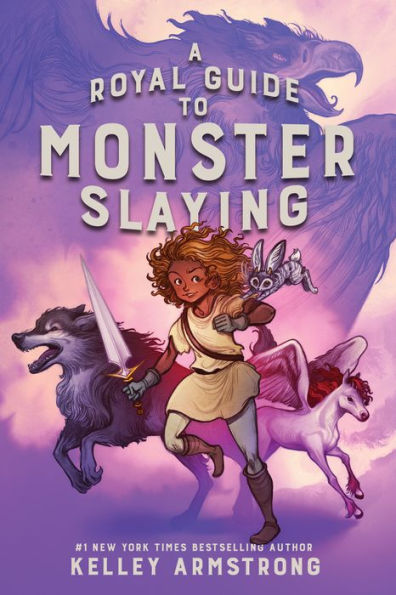 “In the heat of battle, sometimes there is no way of knowing which way is right. We can’t foresee the future. We make a decision. . . and we live with the consequences.” –A Royal Guide to Monster Slaying

A Royal Guide to Monster Slaying

Twelve-year-old Rowan is destined to be Queen and her twin brother, Rhydd, is to be Royal Monster Hunter. Rowan would give anything to switch places, but the oldest child is always next in line, even if she is only older by two minutes. She resigns herself to admiring her monster-hunting aunt’s glorious sword and joining her queen mother for boring diplomatic teas. But tragedy shatters the longstanding rule, and Rowan finds herself hunting the most dangerous monster of all: a gryphon.

Accompanied by a feisty baby jackalope and a giant wolf that barely tolerates her, Rowan sets off on a journey that will see her join other unlikely allies: a boy with monster-hunting ambitions of his own, and a girl hiding dangerous motives. It will take all of Rowan’s skills, both physical and diplomatic, to keep this adventure on track. The future of her kingdom depends on it.

Rowan and her brother Rhydd follow their aunt on a hunt that ends in a bloody battle and death. The heart-stopping battle is not for the faint of heart. Armstrong uses detailed descriptions of the battle between beast and man. Even though many of the monsters in the story are deadly, Rowan respects the monsters because she has been taught to only kill monsters if there is no other choice.

The story is told from Rowan’s point of view, which allows the reader to understand her concern for others. Rowan often acts overconfident; however, in the end she learns the importance of listening to others and working as a team. The know-it-all princess befriends a baby jackalope and their relationship will make readers long for a jackalope of their own. Through her journeys, Rowan learns that no man or beast should be forced to follow another. People should only follow a leader by choice, not by force.

The cute book cover may give readers a false impression. A Royal Guide to Monster Slaying hits on some heavy themes: the importance of family, duty, conservation, indentured servitude, and political ambition. Rowan is kidnapped, almost killed multiple times, and has a face-to-face encounter with a giant spider and a deadly gryphon. The frightening encounters may leave some readers with nightmares. A Royal Guide to Monster Slaying is full of action, danger, and monsters who aren’t afraid to kill humans. The imaginative world is unique, fascinating, and will keep readers turning the pages. Readers who want an excellent adventure will want to follow Rowan as she learns how to become the next Royal Monster Hunter.

“In the heat of battle, sometimes there is no way of knowing which way is right. We can’t foresee the future. We make a decision. . . and we live with the consequences.” –A Royal Guide to Monster Slaying