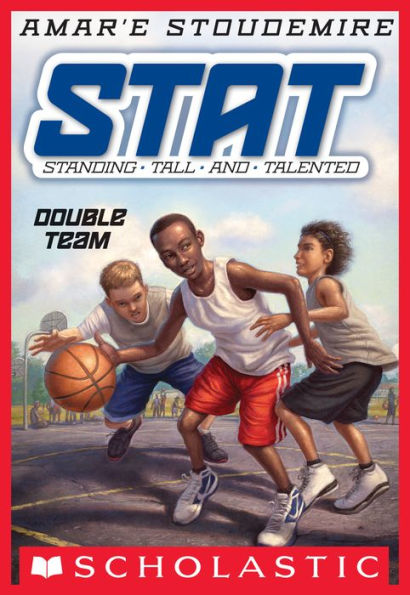 Other books by Amar'e Stoudemire

“I think you’re growing up baby. And not everyone grows as fast or as far, not in school, not in life, and definitely not on the basketball court,” Mom. –Double Team

Eleven-year-old Amar’e Stoudemire has always had fun playing basketball with his friends. Competing in tournaments with his two best friends, Deuce and Mike, has made Amar’e realize that his true passion is basketball.

Amar’e and his two best friends usually play as a team, but when the competition gets intense, Amar’e thinks that he is the only one capable of getting the ball into the net. Amare’s getting attention from older, better players. When Amar’e gets invited to a special invitation-only tournament, he wonders if ditching his friends is the right thing to do. Will Amar’e’s friends stand by him even if he leaves them behind on the basketball court? In order to keep his friends, will Amar’e need to turn down the opportunity to play in the special tournament?

Basketball fans will enjoy the play-by-play action Amar’e and his friends compete in a tournament. When Amar’e’s friends get angry that he is “hogging the ball,” Amar’e doesn’t try to see things from his friends’ point of view. Instead, he is overconfident and focuses on how his friends aren’t being fair. In the end, Amar’e talks to his mother and brother about the conflict, which allows him to solve the problem and keep his friends. Amar’e brother tells him, “You’ve got to do your thing, but you don’t want to hurt anyone along the way.”

Although Amar’e has positive interactions with his parents, the story focuses on the tournaments. Because the play-by-play action is told from Amar’e’s point of view, he comes off as arrogant. Amar’e is confident that he is the only reason the team wins so he cuts his teammates out of the action. In the end, Amar’e realizes that friendship is more important than winning.

Basketball fans will appreciate Double Team’s easy vocabulary and the black and white illustrations that are scattered throughout the story. Amar’s has positive interactions with his family and works hard. Younger sports fans with enjoy Double Team because of the relatable character and the realistic conflict. Readers who are looking for similar books should try the Zayd Saleem Chasing the Dream Series by Hena Khan.

Other books by Amar'e Stoudemire

“I think you’re growing up baby. And not everyone grows as fast or as far, not in school, not in life, and definitely not on the basketball court,” Mom. –Double Team