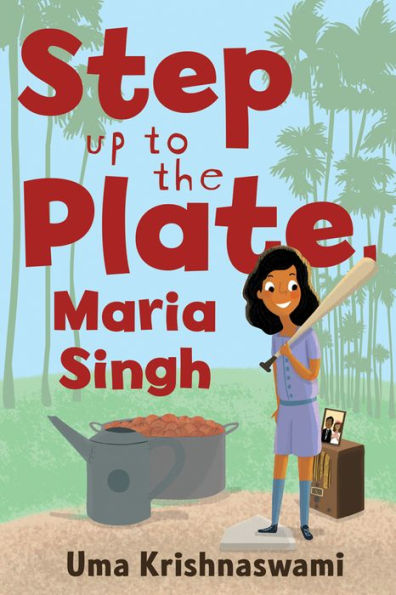 “Maybe playing ball could keep your heart from breaking,” Maria. –Step Up to the Plate, Maria Singh

Step Up to the Plate, Maria Singh

Maria is a nine-year-old growing up during WWII in Yuba City, California. Like most of the families in her community, her father is from India and her mother is from Mexico. Maria spends her time going to school, collecting tin cans for ration stamps, watching her younger brother, Emilio, and helping around the farm, but what she really dreams of doing is playing softball. Luckily, her teacher has just started an all-girls softball team. While Maria learns lessons about teamwork and determination, she also faces prejudice and discrimination on and off the field. With a little help from her parents and her strong-willed aunt, Maria realizes people from different backgrounds may not be so different after all.

Step up to the Plate, Maria Singh gives a new perspective of discrimination and prejudice that existed during WWII.  Maria’s parents are not American citizens, so they cannot own land and must rent their farm. This becomes a problem when their landlord decides to move. Maria is subject to racism, and she gets into a fight when a classmate calls Maria’s friend a “dirty half-and-half.” Through Maria’s story, readers will understand how a culture can normalize prejudice. Although the racism and discrimination in the book occurred during WWII, readers will see that many of today’s problems are similar.

Because Maria’s parents are of different religions, the book focuses heavily on religion, which is a fundamental part of Maria’s community. Although her household leans a little more towards the Catholic side, Maria’s father talks about Sikhism and brings his family to a temple. Maria is not partial to either religion and includes both in her prayers. While Maria appreciates her parents’ cultures, she doesn’t feel they are completely her own.

Readers will relate to Maria as she tries to make sense of the world and find her voice. Maria is a relatable character who, like most people, has flaws.  Maria lies to her mother but then feels guilty. While playing softball, she learns the value of being a team player.  When she faces prejudice, she learns what it means to hate and the importance of forgiveness. Through Maria’s eyes, readers will learn the importance of speaking up during difficult times.

Step up to the Plate, Maria Singh is a great way to introduce readers to this little-known part of history. The end of the book has an author’s note that helps readers understand the story’s context. Lovers of softball (or any sport) will identify with Maria’s softball obsession and how she uses it as a means of escape and personal victory. This story also shows the value of sports as a means of bringing a community together.

“Maybe playing ball could keep your heart from breaking,” Maria. –Step Up to the Plate, Maria Singh