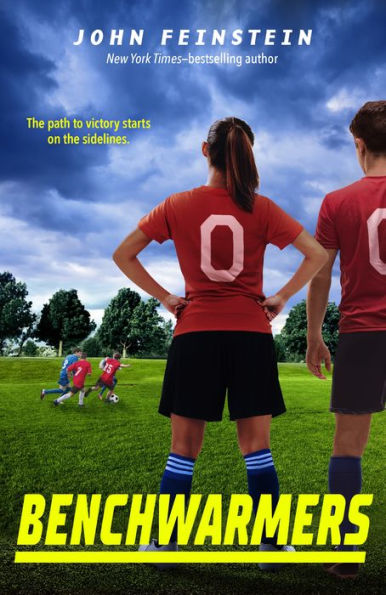 “The important thing today, though, is you guys figured out a way to come from behind and win,” Coach J. —Benchwarmers

Jeff and Andi, both sixth-graders at Merion Middle School, are trying out for the boys’ soccer team. There is just one issue: Andi is a girl, and the head coach, Coach J, thinks having a girl on the team would lower the boys’ moral. The principal forces Coach J to let Andi try out. But, Coach J, who has the final say on who makes the team, cuts Andi despite her more than competent tryout.

Both Andi and Jeff are furious because of the coach’s decision. Jeff made the team, but he knows Andi would be an asset to the team. The situation seems hopeless until he has an idea. His dad works at NBC Sports-Philadelphia as a reporter. Together, Andi, Jeff, and his dad devise a plan to get the media involved in Andi’s situation. They hope to pressure Coach J into letting Andi on the team. They were right; Andi is finally allowed to play soccer on the boys’ team.

It’s not smooth sailing once Andi makes the team. Coach J punishes both Andi and Jeff by benching them during games. There is a division on the team between the boys who think Andi should be included and those who don’t. This division costs the team the first few games of the season. When Andi makes a good play in the short amount of time she is on the field, Coach J realizes he is making a mistake. He learns to value Andi as a skilled player and eventually promotes her to a starter. By reluctantly acknowledging Andi’s skill, Coach J sets an example for the rest of the team. The boys come to appreciate Andi and they become a strong and cohesive team.

Benchwarmers is told in third person and focuses on Jeff, Andi, and Coach J’s points of view. This allows readers to understand each character’s background. Each character has to overcome adversities. For example, Jeff has to work hard to improves his soccer skills. Andi fights for her place on the team, taking a lot of bullying but eventually becoming a valued player. Coach J overcomes his chauvinistic beliefs and learns to appreciate Andi.

Benchwarmers’ main theme is doing what is best for the team. Andi is such a good player because she “creates chances for other people.” In addition, the team only starts winning games when they play to each other’s strengths. By the end of the book, good sportsmanship is important to all of the players. The boys support each other and Andi on the field. Even the opposing teams apologize for roughhousing Andi and compliment her skill.

While Benchwarmers focuses on soccer, the story also gives a good, age-appropriate insight on how the media works. It shows how a media story is approved, planned, and rehearsed. Learning about the media is interesting, but the many meticulous play-by-play game scenes might get old to readers who are not soccer fans. However, the characters are relatable and admirable for their perseverance and for supporting one another. Andi and Jeff work hard to prove themselves on the field. At the beginning, Coach J is stuck in his ways, but he redeems himself by the end. Although slightly dragged out, Benchwarmers will entertain soccer fans as it encourages them to work hard for what they believe.

“The important thing today, though, is you guys figured out a way to come from behind and win,” Coach J. —Benchwarmers