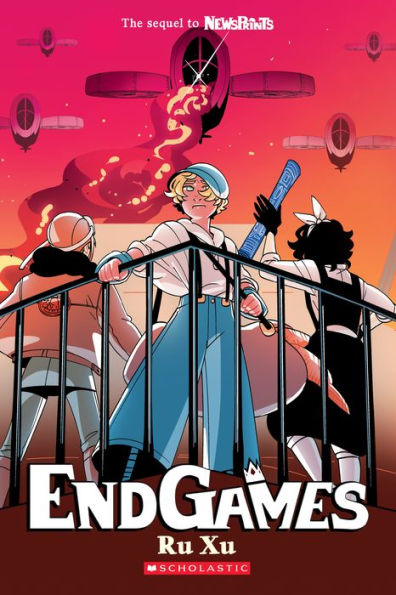 “At what age should one be prepared to kill or die for one’s country?” Red. –EndGames

Blue arrives in the capital city of Altalus, where she is determined to find her friend Crow, the boy who was created to be a flying war machine, and Jack, the engineer who built him. But soon she is inadvertently kidnapped by Snow and Red, twins from the enemy side of their ten-year war. They set off on a dangerous adventure that brings them to the front lines of the war, and eventually realize that they must work together to help end it. But with larger, more powerful forces at work, the fight for peace and survival will be more difficult than they ever imagined.

The majority of EndGames’ plot focuses on the war between Goswish and Grimmaea. However, readers may have a difficult time following the story because of the abrupt transitions. The story jumps from scene to scene causing readers to struggle with keeping up with the new characters and all of the new information. While NewsPrints focused on Blue and Crow’s relationship, in EndGames the two are separated and have little contact. Readers will miss the interaction between the two.

Even though the story is recommended for readers eight and up, younger readers may not be able to understand the more mature themes that appear in the book. The story is very anti-war and shows the dangers of using children to fight an adult’s war. EndGames also shows how governments only print news that is beneficial to them. Instead of being concerned with the truth, many newspapers only spread the government’s propaganda. The newspaper only runs an important true story when “the truth happens to sell even better for the Bugle.”

Unfortunately, EndGames tries to accomplish too much. The story has themes of imperialism, gender roles, and discrimination as well as an anti-war message. EndGames features both a blind character and a transgender character. A female aviator tells Blue, “Oh I’ve always knon I was a boy. . . Other people just didn’t know it yet.” However, the transgender reference is brief and awkward.

Although the artwork is stunning, younger readers may be confused because of the quick transitions. Even though the illustrations help tell the story, some scenes are still confusing. The frantic pacing allows the story to skip over information that may have made the scene’s action clear.

“At what age should one be prepared to kill or die for one’s country?” Red. –EndGames