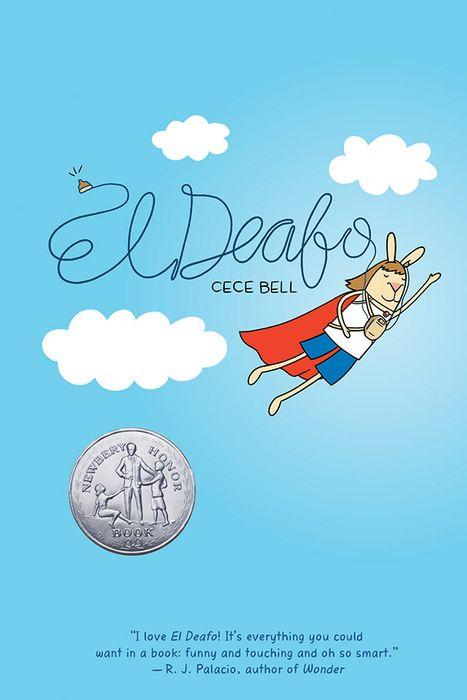 “What a strange day! Pajamas at school. A ‘date’ with Mike Miller. Everyone thinks the Phonic Ear is cool. And Martha didn’t totally avoid me. . .” Cece. –El Deafo

Starting at a new school is scary, especially with a giant hearing aid strapped to your chest! At her old school, everyone in Cece’s class was deaf. Here, she’s different. She’s sure the kids are staring at the Phonic Ear, the powerful aid that will help her hear her teacher. Too bad it also seems certain to repel potential friends.

Then, Cece makes a startling discovery. With the Phonic Ear she can hear her teacher not just in the classroom but anywhere her teacher is in the school—in the hallway . . . in the teacher’s lounge . . . in the bathroom! This is power. Maybe even a superpower! Cece is on her way to becoming El Deafo, Listener for All. But the funny thing about being a superhero is that it’s just another way of feeling different . . . and lonely. Can Cece channel her powers into finding the thing she wants most… a true friend?

Through Cece’s experiences, readers will come to understand how Cece uses visual clues, context clues and gestural clues to understand what others are saying. Often, Cece can’t understand what someone is saying; this is indicated through text boxes that have gibberish inside of them. Cece is also frustrated by others who don’t understand her disability. For example, while at a sleepover, one of the girls asks, “Can people who wear hearing aids also wear makeup?” Once the girls turn off the lights and start talking and laughing, Cece can’t read their lips and she worries that they are talking about her, so she decides to go home.

Some people who are trying to be helpful make Cece feel worse. Sometimes, people would try to talk to her in sign language, but “some people put on a real show when they start signing—almost like mimes.” Events like this make Cece feel worse because she doesn’t want others to focus on her. One of Cece’s coping mechanisms is to daydream about being El Deafo. Pretending to be El Deafo allows her to process her feelings and voice opinions that could not be said aloud.

El Deafo is based on Bell’s own childhood and her complex emotions about her hearing impairment. While Cece’s emotions shine, readers may have a difficult time relating to the Phonic Ear because of advancements in technology which doesn’t require wires that lead from the device to the ear. However, Cece’s struggles will be relatable. She worries about being different, making friends, having people stare at her, and having a crush. One downside of the story is that Cece’s peers do not embrace her until they realize that Cece can use the Phonic Ear to warn them when the teacher is coming back into the room.

In the author’s note, Bell explains the different ways people become deaf or hearing impaired as well as the different ways people cope with their disability. She also explains that she learned to view her deafness as a gift. “And being different? That turned out to be the best part of all. I found that with a little creativity, and a lot of dedication, any difference can be turned into something amazing. Our differences are our superpowers.”

The graphic novel’s format and rabbit characters will appeal to readers. Each page is divided into panels and has 5 to 11 sentences. While the characters’ words appear in text bubbles, the narration appears in yellow boxes at the top of a frame. When Cece takes on the personality of El Deafo, the frames are surrounded by green which makes it easy to distinguish between fact and fantasy. El Deafo will help readers understand what if feels like to be hearing impaired, which makes it an excellent book to add to your child’s reading list.

“What a strange day! Pajamas at school. A ‘date’ with Mike Miller. Everyone thinks the Phonic Ear is cool. And Martha didn’t totally avoid me. . .” Cece. –El Deafo