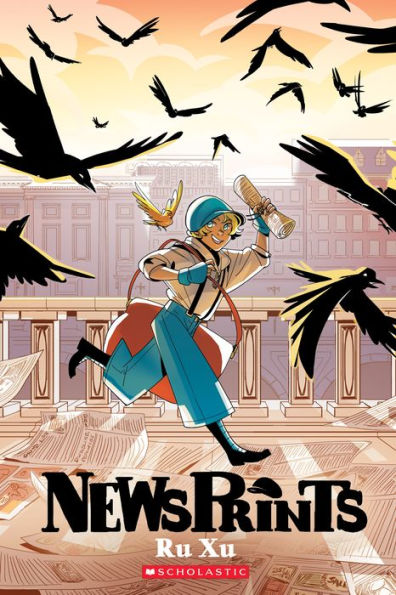 “You made a choice, and I’m gonna protect it,” Blue. —News Prints

As a newsie, Blue can sell just as well as the boys in her town of Nautilene. Living in a home with other newsies, Blue feels safe even though her homeland, Goswing, is fighting a war. But Blue is afraid that danger isn’t just lurking in the shadows of her war-torn country. She’s afraid that others may discover her secret—Blue is not a boy.

When Blue is offered a job as an apprentice to a scientist named, Jack, Blue is excited to learn new skills. While working with Jack, Blue meets Crow, a reclusive boy, who has secrets of his own. The two instantly become friends, and together, they help each other to become their true selves.

News Prints is a combination of steampunk and historical settings. Even though the story has old friends, conspiracy, and interesting inventions, the story is not original. Blue disguises herself as a boy, which requires her to answer questions about her identity. Her new friend’s crow also has a secret about his identity. The theme is clear: people should not make assumptions about others and people should have the freedom to be their true selves.

Although the artwork is stunning, younger readers may be confused because the basic story lacks important background information about the setting. Even though the illustrations help tell the story, some scenes were confusing. The frantic pacing allows the story to skip over information that may have made the scene’s action clear.

Blue comes to realize that even though the war has torn families apart, strangers can come together to make their own family. The story also shows how the media is not always truthful and how the government bends the news to lie to people. In today’s world, this is a theme worth exploring.

News Prints is told from Blue’s perspective, which allows the reader to connect with her. Blue is honest, loyal, and compassionate. She doesn’t back down from causes that she believes in. Younger readers may be confused because of the lack of background information, but for strong readers who have already jumped into reading graphic novels, News Prints will entertain.

“You made a choice, and I’m gonna protect it,” Blue. —News Prints