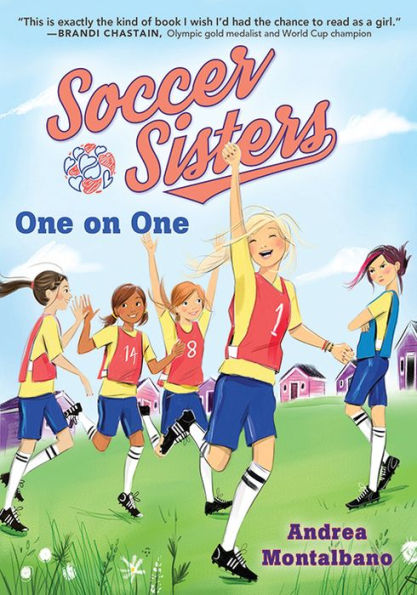 “Chloe loved the freedom of soccer, the freedom to be creative with your body and your mind, the challenge of syncing that creativity with your teammates.” –One on One

Chloe Gordon is super excited to attend summer soccer camp with her soccer sisters and fellow Breakers team members, Makena Walsh and Val Flores—even though she’s not quite as skilled as the other girls and her parents would rather her be spending her time practicing ballet.

When Chloe arrives, she discovers that the Breakers’ arch rival, Skylar Wilson, is rooming down the hall. Chloe worries that her camp experience will be more stressful than fun. Will the soccer sisters be able to band together and ignore Skylar’s bullying? Can Chloe overcome her fear of not being good enough in time for the big inter-camp match?

Former soccer player, coach, and motivational speaker Andrea Montalbano creates a fast-paced soccer story that teaches the value of determination. Readers will relate to Chloe, who is being targeted by Skylar, who has learned how to hide her bullying behavior. Besides the bullying, Chloe also struggles with self-confidence. After all, her mother doesn’t think Chloe should be on the team because “If you can’t be the best, why bother doing it at all?”

Even though One on One has a stereotypical plot, readers will enjoy its fast pace as it combines soccer and bullying into an engaging story. Told from Chloe’s point of view, One on One doesn’t just focus on the game; the story also gives a glimpse of Chloe’s home life, which adds humor and depth to the story. Chloe is a likeable character who has relatable conflicts both at home and at soccer camp.

One on One teaches about Brazil’s culture. Flavia, a camp counselor from Brazil, agrees to help Chloe with her soccer skills. When Chloe doesn’t make the team, Flavia is upset because Chloe doesn’t understand that winning isn’t always the most important thing. Flavia is also frustrated that the campers do not realize how privileged they are. Instead, “all you girls complain if the water is too warm or if you can’t win or if the field is not perfect. You have everything right in front of you, but yet you cannot see it.” Flavia shares her story, which gives Flavia’s cultural perspective as well as highlights the discrimination that girls in Brazil face. For example, in Brazil girls are expected to play with dolls, not soccer balls.

One on One’s high interest topic, advanced vocabulary, and short chapters make the story accessible to proficient readers. While One on One is the third installment of the Soccer Sisters series, each book can be read as a stand-alone book. While the story focuses on sports, the snippets of family life and drama off the field make One on One a book that all readers will enjoy. The book ends with questions, information on soccer in Brazil, a glossary of soccer terms, and a short biography on Olympian Brandi Chastain. Through Chloe’s experiences readers will learn lessons in sportsmanship as well as the importance of practice, determination, and keeping your word.

“Chloe loved the freedom of soccer, the freedom to be creative with your body and your mind, the challenge of syncing that creativity with your teammates.” –One on One