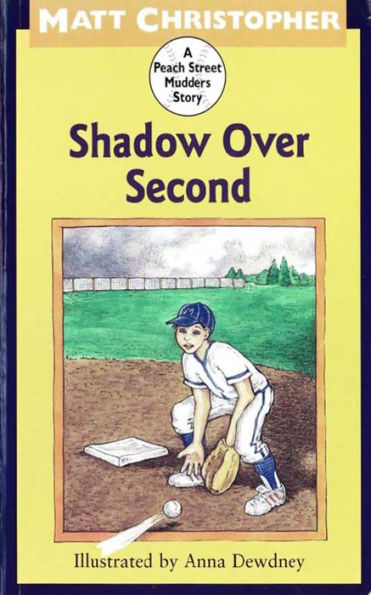 Other books by Matt Christopher

“Nicky, if you don’t get a hit this game, it won’t be because of something your father said. It will be because you think superstition counts more than your ability,” Mrs. Chong. —Shadow Over Second

Nicky Chong is set to beat the RBI record with his baseball team, the Peach Street Mudders. The problem is that people accidentally keep saying things to jinx Nicky, who is very superstitious. What’s worse is that the kid who currently holds the record, Sam Jolly, might be trying to sabotage Nicky’s chances.

Shadow Over Second is primarily about Nicky overcoming his reliance on superstitions. Nicky is a good baseball player, but he seems to believe that he does well because he has highly specific routines before each game. He believes that if he doesn’t complete the routines, then he won’t perform well. In the end, Nicky’s mom helps him understand that his superstitions are nothing more than that—superstitions. In addition, Nicky learns that his ability is far more important than any jinx.

The current RBI record holder is Sam Jolly, who is older than Nicky. Nicky’s team has to play Sam Jolly’s brother’s baseball team, which is a point of tension for both Nicky and Sam’s brother, Stick Jolly. Trying to sabotage Nicky’s shot at the record, Stick locks Nicky and his teammate in the shed right before a game. In the end, Nicky realizes that it was Stick who locked them in, and Nicky confronts him. The resolution is peaceful, and Nicky takes the high road. Instead of continuing to be angry, Nicky forgives Stick.

Shadow Over Second will mostly appeal to elementary readers who like baseball, as it is a very short book with a straightforward and simple plot. Although baseball terminology and gameplay are large parts of the book, it is easy for non-baseball players to understand. Shadow Over Second may bore older readers who are looking for more complex character development and storytelling. Middle school baseball fans should check out Heat by Mike Lupica.

Shadow Over Second is part of the Peach Street Mudders Series; the other books follow stories about Nicky’s other teammates, and they do not have to be read in order. Each book focuses on a different baseball player on the team. Readers who enjoy baseball will be glad to find that the Peach Street Mudders have many baseball-related stories to tell. Although Shadow Over Second is quite short, it contains good lessons for kids about integrity and not placing superstitions above hard work and ability.

Other books by Matt Christopher

“Nicky, if you don’t get a hit this game, it won’t be because of something your father said. It will be because you think superstition counts more than your ability,” Mrs. Chong. —Shadow Over Second