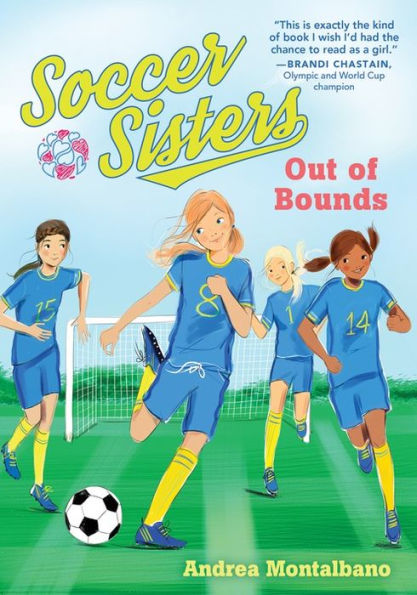 “We never give up on one another. We’re soccer sisters,” Makena. –Out of Bounds

Makena Walsh absolutely loves soccer. She knows it’s the best sport around, and she feels lucky that the teammates on her super competitive and super skilled team, the Brookville Breakers, feel the same way. The girls always have and always will be soccer sisters.

When a new person joins the Breakers, everything changes. Skyler is a great player and really cool—but she also doesn’t always play by the rules. Makena, hoping to impress Skyler, starts acting out and running wild, off and on the field.

With a huge tournament looming, Makena’s got tough choices ahead–choices that will affect her family, her friends, and the game she loves. Can she stay true to what the soccer sisters believe in and win the big game?

At first, Makena thinks Skyler’s crazy ideas are fun, but soon Skyler’s lies add up, and Makena’s guilt catches up with her. To make matters worse, sneaking out and staying up late is affecting Makena’s game. Soon, Skyler’s behavior doesn’t seem so cool, especially when Skyler uses deception to win. She tells her teammates, “Just remember, when you get hurt, even a little, roll on the ground and act as if your leg is about to fall off. That way you will get the free kick or the penalty kick. Everybody does it.”

Out of Bounds’s play-by-play action will appeal to soccer players and sports lovers. The majority of the action takes place on the field; however, readers will get a glimpse of the crazy things Skyler convinces Makena to do as well as of Makena’s home life. In one scene, the reader will learn about the dangers of smoking through Makena’s grandfather who used to smoke and now has emphysema.

Makena is a relatable character who doesn’t like lying to others, but she struggles with the ability to say no. Because the story is told from her point of view, the reader will understand Makena’s worries. In the end, Makena grows as a character and realizes that “being a star off the field is as big a part of soccer as being a star on the field.” During the last tournament, Makena is able to stand up to Skyler and finally do what’s right, including telling her parents about her bad behavior.

The Soccer Sisters series is written by former soccer player, coach, and motivational speaker Andrea Montalbano. Out of Bounds’s high-interest topic, advanced vocabulary, and short chapters make the story accessible to advanced readers. While the story has relatable conflicts and many positive lessons, the many play-by-play soccer scenes are designed for soccer players and fans. The book ends with one suggested activity, questions, a glossary of soccer terms, and a short biography of Olympian Brandi Chastain. Those who have read Montalbano’s book, Breakaway, will see many similarities in the characters and plot. Out of Bounds is a fast-paced story that will engage soccer fans as it highlights the importance of compassion, sportsmanship, leadership, and following the rules.

“We never give up on one another. We’re soccer sisters,” Makena. –Out of Bounds