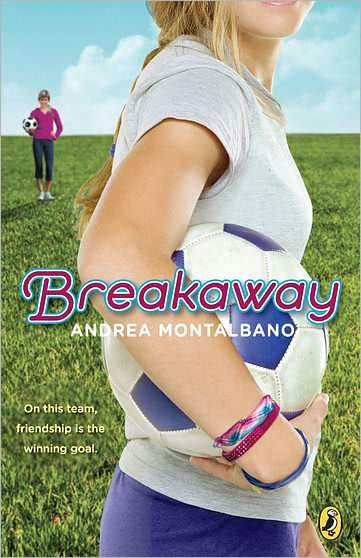 Twelve-year-old Lily knows her place in the world is on the soccer field. When she’s out there scoring goals, everything’s right. Lately, though, her competitive spirit has been getting the best of her, and she begins to alienate all of her friends. Tabitha, a popular girl who spends most of her time on the bench, would give anything for Lily’s confidence and ability on the soccer field. Meanwhile, Lily secretly admires Tabitha’s world of money and friends. When it’s Lily on the bench instead of Tabitha, she figures out a few things she never expected and realizes that sometimes it takes more skill to make others look good instead of yourself.

Lily clearly loves soccer, but she is often overconfident and has a difficult time controlling her anger. Lily tells her own story in Breakaway, which allows the reader to follow Lily’s thought process and understand her emotions. When Lily isn’t picked up for a select team, she gets angry at her best friend, Vee, who makes the team. Lily is overcome with jealousy and also “was developing a long laundry list of people to blame.” Lily believes that she is the best player on the team, and others should recognize her skill. When Lily is suspended from the team, she has a hard time taking responsibility for her actions. It isn’t until the end that she realizes, “I can tell you all the talent in the world is wasted if you think you can do it all alone. No one can. The world doesn’t work like that. Families don’t work like that, friendships don’t work like that and I’m pretty sure soccer teams don’t work like that either.”

Even though Lily’s family life is interspersed in the story, the long descriptions of soccer make the story best for soccer fans. The fast-paced story teaches many lessons about sportsmanship as well as the importance of taking responsibility for your actions. Lily’s parents are another positive aspect of the story. They are interesting, unique, and demonstrate healthy family relationships. Her parents don’t expect her to be perfect. Instead, Lily’s father tells her, “You can’t erase your mistakes, LJ. You can make up for them and you can make sure not to repeat them, but you can’t just will them to disappear.”

Breakaway combines soccer and family into a fast-paced story that teaches positive lessons. The story’s advanced vocabulary and the large cast of characters makes Breakaway best for proficient readers. Soccer fans may also want to read the other books in Montalbano’s series, Soccer Sisters. As a former soccer player, coach, and motivational speaker, Montalbano creates an entertaining story about soccer, friendship and family.