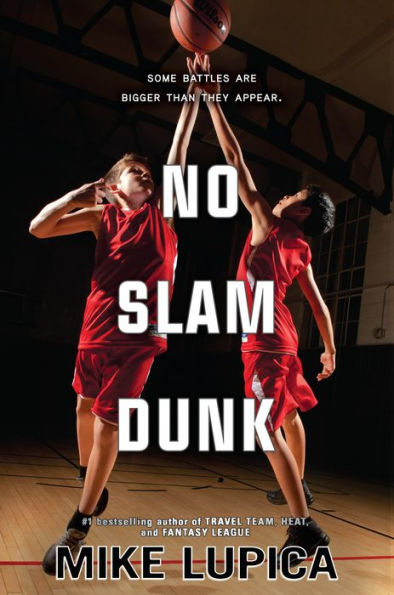 Wes Davies only cares about two things in life—his family and basketball. This year’s basketball season gives Wes the chance to be seen by college coaches. But a new teammate Dinero’s selfish play might get in the way of Wes’ goals of them becoming a real team. While Wes tries to navigate difficult teammates, he also worries about his father. Lt. Michael Davies has returned from Afghanistan with secrets and a growing drinking problem. Will Wes be able to overcome selfish teammates? Will he be able to reconnect with his distant father?

No Slam Dunk is a story that might seem very familiar to readers who are fans of Mike Lupica. This story mirrors Travel Team. Both books have the same age boys who love basketball, dads who have problems with alcohol, and a witty best friend. No Slam Dunk’s characters tend to fall flat as they are not fleshed out well. Wes’ mother and best friend are the stereotypical characters found in a book about family; a son who is passionate about a hobby or sport and wants his dad to be in his life, and a mother who loves her son and wants the best for him. While these characteristics are certainly not bad, they are not expanded in any detail, leaving the reader to see dull characters who are no different than any other character they’ve read about.

Although Mike Lupica’s talent as a sports writer is apparent, this novel’s storyline does not measure up to the reader’s expectations. The short chapters alternate between basketball and Wes’s life at home, which makes many of the book’s scenes feel rushed. Every other chapter focuses on basketball play after basketball play, which hinders character development. While Dinero and Wes’s relationship is shown as positive growth in both of their lives, it is one of the only relationships that is nurtured.

Wes’s father, Lt. Michael Davies, has just returned from Afghanistan, and he is dealing with PTSD, isolation, and alcohol abuse. Despite having a difficult time communicating with his father, Wes doesn’t seem to feel anger or any other strong emotions, which is unrealistic. The story looks at the struggle between Lt. Davies and his family superficially and does not dive deeper into how his drinking would truly affect his family.

Although the short chapters and simple vocabulary make No Slam Dunk a good choice for reluctant readers, those who do not enjoy or know about basketball will want to leave it on the shelf. Despite some superficial characters, young basketball lovers will enjoy seeing a character they can identify with.