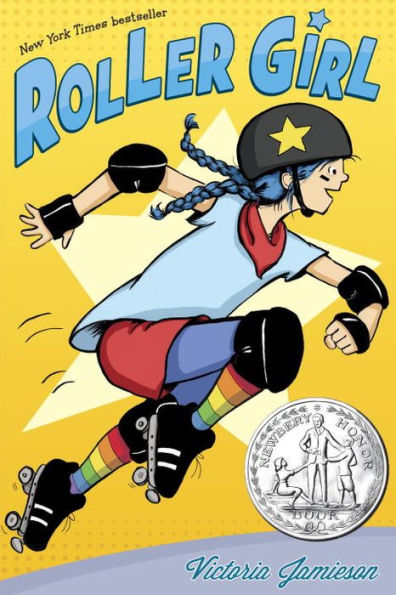 "It takes a real hero to take a hit for the team, and to let the spotlight shine on someone else," Rainbow Bite. ―Roller Girl

Ever since second grade, twelve-year-old Astrid has done everything with her best friend Nicole. When Astrid’s mother takes her and Nicole to a roller derby event, Astrid decides she wants to be just like roller derby girls and signs up for a roller derby summer camp. Astrid assumes Nicole will sign up with her, but Nicole signs up for ballet instead. This starts a conflict between the two friends and is the start of a difficult summer for Astrid.

At first, Astrid seems like an angry, bratty character who chases her best friend away. However, as the story progresses, the reader begins to see deeper into Astrid’s mixed emotions. Astrid struggles with the idea that Nicole wants to spend time with other people, including boys. When Astrid eavesdrops on one of Nicole’s conversations, she is upset that Nicole doesn’t stand up for her and reacts in anger. Like many preteens, Astrid must learn the difficult task of navigating friendships, but, in the end, she learns some valuable lessons including how to control her anger, how to forgive, and how to put other’s needs first. Another positive aspect of Roller Girl is that Astrid shows that through hard work and perseverance, a person can improve their skills and contribute to their team.

Readers will be drawn to Roller Girl because of the colorful cartooning that excels at showing the characters’ emotions. They will continue reading because of the fast-paced plot that covers many issues that preteens deal with: friendship, boys, parents, honesty, and feeling like a failure. The conclusion is heartwarming because Astrid changes from an angry girl into a supportive friend.

Violence
• In one of the pictures, siblings are shown hitting each other.
• When Astrid overhears her best friend talking to someone else about how to stop being friends with Astrid, she feels angry and throws soda at them. “I don’t know why I did it. I didn’t mean to hit them—I just meant to throw my soda at their feet.”
• Astrid is learning roller derby, which has pushing, shoving, and blocking. At practice, Astrid is thinking about hitting Nicole and hits someone else instead.

Drugs and Alcohol
• A girl tells Astrid’s friend that Astrid is “probably on drugs or something.” Astrid does not do drugs.
• When Astrid’s mother finds out Astrid has been lying to her, she says, “. . . and you’re going to be a teenager soon. How do I know you won’t lie to me about smoking, or skipping school, or doing drugs?” Astrid wonders, “Why does everyone think I’m doing drugs?”

Language
• Several characters call others names including “jerk”, “moron”, “rat-faced jerk”, “weirdo”, and “losers.”
• “OMG” and “OHMYGOD” are used as exclamations.
• “Crud” is used once.
• A character calls her siblings “turd buckets.”
• Astrid talks about how other kids call her “Ass-turd.”

"It takes a real hero to take a hit for the team, and to let the spotlight shine on someone else," Rainbow Bite. ―Roller Girl