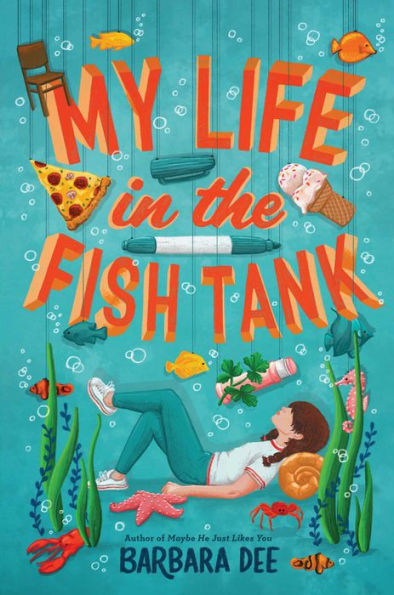 “How are you going to work stuff out if you just give up on people?” Luz —My Life in the Fish Tank

My Life in the Fish Tank

Twelve-year-old Zinnia “Zinny” Manning loves her siblings and adores her older brother, Gabriel. But one night, the Manning family gets a call that shakes up their lives: Gabriel has a mental illness and will be going to a rehabilitation center. Zinny’s parents tell Zinny and her two other siblings, sixteen-year-old Scarlett and eight-year-old Aiden, to keep quiet about Gabriel. This means that Zinny can’t confide in her two best friends, who don’t understand why Zinny has been acting differently and won’t talk with them about what happened.

My Life in the Fish Tank discusses themes like mental health, family, and the importance of expressing your feelings. Zinny and her family struggle with understanding Gabriel’s diagnosis (bipolar depression), and each character has a unique way of coping. Zinny’s mom insists on keeping Gabriel’s diagnosis and treatment a secret, while Zinny’s dad buries himself in work and becomes very quiet. Zinny’s older sister Scarlett lashes out and refuses to speak to or visit Gabriel, and younger brother Aiden is left to deal with his emotions and schoolwork on his own. Zinny takes on a parental role over Aiden, and tries to help him with homework, making dinner, and trying to crack jokes.

Zinny’s main tactic is avoidance of her own emotional turmoil, which frustrates and saddens others around her, especially her best friends. As a result, Zinny grows apart from them and spends more time with her cool science teacher, Ms. Molina, who teaches Zinny about the wonderful world of crayfish. Ms. Molina notices Zinny’s separation from her friends, however. This leads to Zinny’s invitation to join the Lunch Club, where a group of students meets with guidance counselor Mr. Patrick. The Lunch Club is set up like group therapy, but with middle school students and pizza.

Initially, Zinny hates attending, but she eventually befriends the others in the club and learns to express her feelings in a healthy and productive manner. Zinny makes peace with her feelings about Gabriel, her parents, and ultimately herself. Zinny also learns that even when bad things happen, she’s allowed to enjoy good things, too. Zinny wants to be there for her family, and she almost passes up a chance to attend a summer marine biology program. However, Gabriel encourages her to do what she loves.

My Life in the Fish Tank explores how mental health affects a family. Zinny is a wonderfully flawed character who starts on the path to emotional maturity. Most importantly, this book shows that everyone is always learning—about mental health, and how to handle their emotions and communicate with loved ones. Gabriel’s diagnosis didn’t change him, but he and his family had to learn to understand each other in new ways, and to be emotionally perceptive when others react to trauma in different ways. By the end of the book, Zinny no longer feels trapped in her fish tank of feelings, watching as life happens around her. Through self-expression and love, she can be honest with her loved ones, and they can be honest with her. My Life in the Fish Tank will help middle school readers understand more about mental health and can be used as a discussion starter. Readers who struggle with difficulties such as anxiety will want to add After Zero by Christina Collins to their reading list.

“How are you going to work stuff out if you just give up on people?” Luz —My Life in the Fish Tank