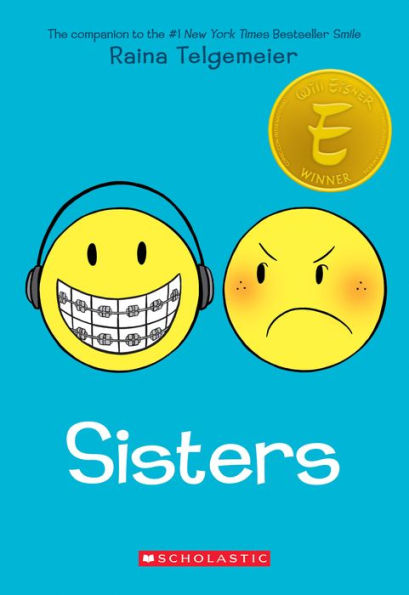 “Would it be the end of the world for you to not have your Walkman on for a few hours?” Amara –Sisters

Raina wants a little sister, but once Amara shows up, things aren’t how she expected them to be. Amara cries a lot. She’s grouchy. To make things worse, Amara always has to get her own way. As the two sisters grow up, their relationship doesn’t improve. When their baby brother is born, the tiny apartment that they live in becomes even more cramped.

When the family is invited to Colorado for a family reunion, Raina’s mom decides to take a road trip without their dad. Being stuck in a car for three weeks doesn’t bring the sisters any closer. Instead, they argue their way across three states. Is there anything that will bring these two sisters together?

Sisters doesn’t just focus on the family car trip, instead, it continuously jumps back to the past to show how Raina and Amara’s relationship has always been full of conflict. Both girls are mean, argumentative, and do things just to irritate each other. Amara is a complete brat, while Raina tries to block out everything by wearing headphones and ignoring everyone. While younger readers may think the sisters’ behavior is silly, parents will not want their children to emulate the siblings’ behavior.

Throughout the story, the two girls are never disciplined. At one point, Raina’s parents give up their bedroom, so Raina can have her own space. Because the parents knew Amara would be “a little put out,” they let her get a pet snake. However, the family doesn’t research the pet before they purchased it, and the snake eventually ends up lost in the family van.

Sisters is a simple story told through both illustrations and text. Each page contains eight or fewer sentences. The easy vocabulary, simple sentences, and bright pictures make Sisters accessible to all readers. The brightly colored pictures do an amazing job at showing the facial expressions of the characters, which brings the character’s emotions to the forefront. Although the story will engage readers, parents may want to skip picking up this book and instead try Raina Telgemeler’s graphic novel Ghost which shows a healthy sibling relationship and has a positive message. Roller Girl by Victoria Jamieson is also an excellent graphic novel that contains a positive message.

“Would it be the end of the world for you to not have your Walkman on for a few hours?” Amara –Sisters