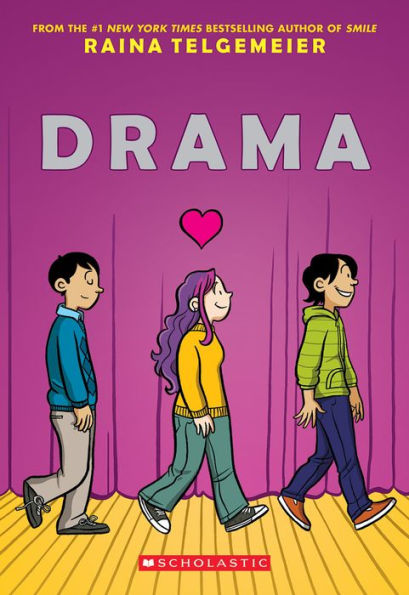 “You and Liz are best friends! You shouldn’t let a guy come between you,” Justine. –Drama

When Callie’s middle school decides to produce Moon over Mississippi, Callie doesn’t want to be on stage. She loves theater, and as part of the stage crew, she wants to create a set worthy of Broadway. But bringing her big ideas to life won’t be easy with a middle school budget and her lack of carpentry knowledge.

Once the actors are chosen, Callie finds herself in the middle of drama onstage and offstage. The actors don’t all get along, and Callie has a confusing crush on an eighth-grader. When two cute brothers enter the picture, things get even crazier.

Drama focuses mostly on the stage crew, which gives the readers a unique look at the hard work that takes place behind the scenes. Told from Callie’s point of view, many fans will be able to relate to Callie as she deals with the confusing world of middle school. Callie is naive, cheerful, and obsessed with having a boyfriend. Callie seems to fall in love with any boy that is nice to her, which causes her heartache. However, Callie does seem to finally realize that having a boyfriend isn’t necessary.

The drawings are colorful and do an excellent job of showing the character’s emotions through their facial expressions. Reluctant readers will appreciate that many of the pages do not have words, but instead tell the story through drawings. Readers will love the manga-infused art, which shows the jealousies and misunderstandings of the cast members.

Although Drama does revolve around the students’ production of Moon Over Mississippi, a majority of the story focuses on the characters trying to discover themselves and their sexual orientation. Like a soap opera, the characters in the book are very interested in who likes who, and who broke up with who. When Callie’s friend tells her that he is gay, Callie easily accepts it and promises to keep the information secret. Drama highlights the importance of being accepting and open-minded, and not judging those who are exploring their sexuality—whether they are straight, gay, or bisexual. Although many readers will enjoy the graphic novel Drama, Callie and the plot are not unique or memorable. There is too much romantic angst and not enough action focusing on the production of the play.

“You and Liz are best friends! You shouldn’t let a guy come between you,” Justine. –Drama