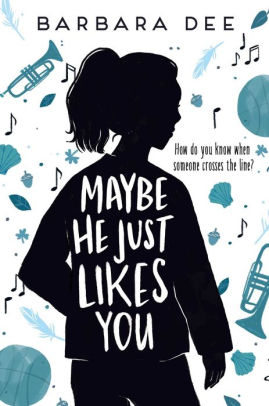 “People don’t always hear the first time. Or they hear, but they don’t actually listen. So it’s up to you to tell them again,” Mom. –Maybe He Just Likes You

For seventh-grader Mila, it started with some boys giving her an unwanted hug. The next day it’s another hug. A smirk. Comments about her body. It all feels weird. According to her friend Zara, Mila is being immature and overreacting. Doesn’t she know what flirting looks like?

But it keeps happening, despite Mila’s protests. On the bus and in the school halls. Even during band practice—the one place Mila thought she could always escape to; her happy “blue sky” place. It seems like the boys are everywhere. And their behavior doesn’t feel like flirting—so what is it?

Mila starts to gain confidence when she enrolls in karate class. But her friends still don’t understand why Mila is making such a big deal about the boys’ attention. When Mila is finally pushed too far, she realizes she can’t battle this on her own, and she finds help in some unexpected places.

Maybe He Just Likes You tackles the difficult topic of consent, boundaries, and sexual harassment in a way that middle school readers will understand. When boys on the basketball team begin sexually harassing Mila, she isn’t sure what to do. Her friends think she is overreacting and being immature. At one point, Mila’s friend Zara tells her, “Look Mila, there’s got to be a reason why they’re picking you. Those boys are super awkward and stupid sometimes, but they aren’t monsters, right? So maybe if you think about what you’re doing—” However, the book makes it clear that Mila’s behavior is not responsible for the boys’ behavior.

Many readers will relate to Mila, who struggles to understand her changing body and the changing social structure of junior high. Soon, the boys’ behavior escalates and begins to cause problems in other aspects of Mila’s life. Like Mila, many readers may struggle with who to turn to in times of need. However, Mila’s story highlights the importance of speaking up and getting an adult’s help. Through Mila’s story, readers will learn that if someone’s touch makes you feel helpless, weird, annoyed, or embarrassed, you need to speak up.

Even though Maybe He Just Likes You does an excellent job showing what sexual harassment looks like, the conclusion is unrealistically hopeful. In the end, the boys apologize to Mila and the harassment stops. However, the story doesn’t show the lasting effects sexual harassment can have on a victim. Instead, Mila and one of the boys continue to sit next to each other in band, and when the boy begins taking karate, Mila gladly helps him.

Maybe He Just Likes You uses short chapters, easy vocabulary, and plenty of friendship drama to keep readers engaged. Being told from Mila’s point of view allows the reader to understand the confusing emotions that Mila battles. Maybe He Just Likes You is an engaging story that highlights the importance of finding your voice. Both boys and girls will benefit from reading Mila’s story because it gives clear examples of sexual harassment and explores the complicated nature of bullying.

“People don’t always hear the first time. Or they hear, but they don’t actually listen. So it’s up to you to tell them again,” Mom. –Maybe He Just Likes You