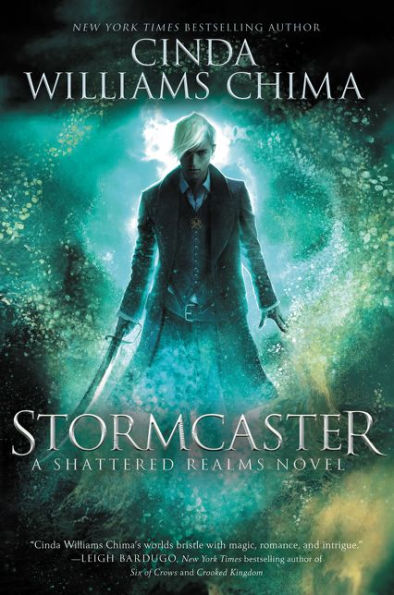 “We are wolves, Adrian. For us, scent is the seat of memory. It is how wolves recognize family, friends, and enemies,” Raisa. —Stormcaster

Pirate Evan Strangward has been hunted by Empress Celestine for most of his life. Being able to control the weather can only protect him for so long. Now, he’s looking to the Fells for allies to take the fight to the Empress. Evan must warn the queendom that Empress Celestine and her bloodsworn army won’t wait forever to invade.

After four years in Arden, Ash sul’Han is on his way back to his home in the Fells. It’s a chance to see his mother and sister, and all the friends he left behind. But once he finds out his sister, Lyss, was taken by Empress Celestine, he’ll stop at nothing to get her back and save the royal line. Ash might not trust Evan, but he needs the pirate’s help if he wants to infiltrate Celestine’s stronghold and end the war before it gets out of hand.

Stormcaster, the third entry in Chima’s Shattered Realms series, is a wonderful installment in this epic tale. The story primarily follows Evan Strangward and Ash sul’Han. Stormcaster goes back in time to show the beginning of Empress Celestine’s rise to power, as well as Evan’s reason for opposing her. Destin Karn’s backstory is also explored. While this backtracking is extensive, it’s a well-thought-out and interesting addition to the story.

When the backstories are caught up to the present, the rest of the main characters are reintroduced. Ash sul’Han, who was absent from the previous novel, is finally back in the picture. When he makes it home to his queen mother, he finds the world completely changed. Ash is a lovable character, who has matured from his rebellious stage. Now he is willing to do whatever it takes to protect his family. As he struggles to work his way back into a world he doesn’t recognize, Ash embodies the themes of maturity and loss.

Overall, Stormcaster is a fast-paced ride. Since most of the main characters are back in action, each chapter shows the reader another part of the world, creating a fleshed-out and believable setting. Luckily, the shifting views are easy to follow. The story focuses on bringing together most of the main characters, so they can plan how to stop Empress Celestine. Will Ash finally reunite with his sister? Will Evan be able to take down the Empress that’s been hunting him? Readers will find out in the final installment, Deathcaster.

“We are wolves, Adrian. For us, scent is the seat of memory. It is how wolves recognize family, friends, and enemies,” Raisa. —Stormcaster