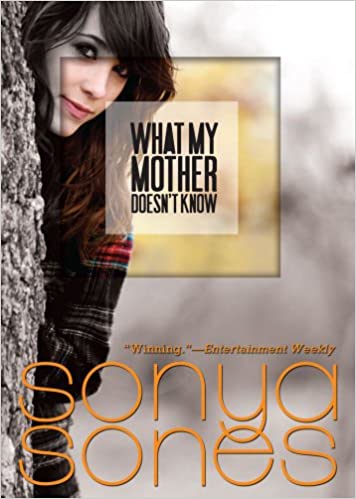 “I mean, he’s Murphy. We’re just friends. And that’s all we’ll ever be. Right?” Sophie Stein. –What My Mother Doesn’t Know

What My Mother Doesn’t Know

When Sophie Stein enters high school, she finds herself falling in love with a boy named Dylan. However, as she goes through some difficult self-discovery, she realizes that she and Dylan are not compatible. Instead of being attracted to Dylan’s intellect, Sophie is only attracted to him physically. Meanwhile, the ups and downs of this romance lead Sophie to chat online with Chaz. At first, Chaz gives Sophie the validation she seeks, but Chaz isn’t prince charming. Instead, Chaz makes sexual comments toward Sophie, who finds herself alone again.

Then Sophie meets Murphy, an unpopular boy who isn’t conventionally attractive. Despite this, Sophie becomes enamored by him and they start hanging out. Sophie discovers that she has more in common with Murphy than she initially thought, and she eventually falls in love with him. In this relationship, her connection with Murphy is stronger than anything she had previously experienced. However, Sophie has a difficult time telling her two best friends about the romance, since most of the school has spent many years making fun of Murphy.

Sophie is a relatable character dealing with the average struggles of a teenager. Throughout the novel, she attempts to discover who she is in both her romantic life and family life. She also combats peer pressure and her own insecurities. In the end, Sophie overcomes her fears of becoming unpopular and is no longer afraid to show her affection toward Murphy. One of the big themes of this novel is that attempting to be popular and well-liked should not come above what brings happiness. Another theme is to not judge a book by its cover. At first, Sophie judges Murphy, but when she looks beyond his appearance Sophie forms a beautiful relationship with him. These messages will resonate with many teens.

The story’s conclusion is predictable because from the first time Murphy appears Sophie finds herself dealing with a strange attraction toward him. Plus, the story lacks conflict and the ending is a bit too happily ever after. Because Sophie is a teenager, she can act a little childish at times. She approaches many things, like romance, for the first time in her life. Therefore, she comes across as a bit naive when dealing with these new situations. Since Sophie focuses a lot on her blooming sexuality and the intense attraction she feels towards the men in her life, only big romance fans will enjoy What My Mother Doesn’t Know.

What My Mother Doesn’t Know is told through a series of poems and diary entries that Sophie writes, making it a quick read. While the novel is told entirely from the perspective of the main character, readers won’t find it difficult to relate to other characters in the book. Not only are Sophie’s romantic interests well-developed, but so are her best friends and parents. Overall, the story is a cute tale of teenage romance.

“I mean, he’s Murphy. We’re just friends. And that’s all we’ll ever be. Right?” Sophie Stein. –What My Mother Doesn’t Know