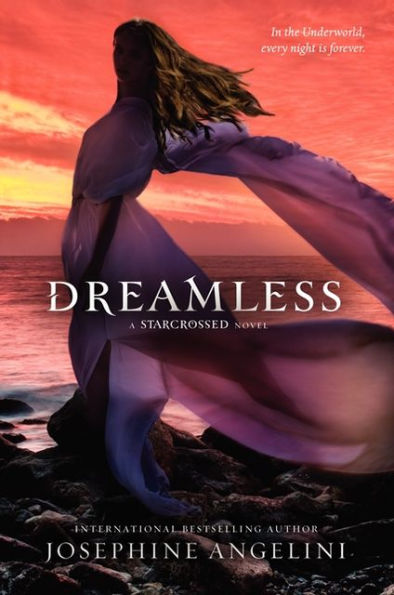 “...try to remember that dreams do come true, but they don't come easily.”  —Dreamless

Helen’s world is turned upside down when she discovers that Lucas, her beloved, is her cousin. Tormented by the guilt of being in love with someone she is related to, and unable to banish her feelings for him, her despair begins to affect her time in the Underworld. Her experiences in the Underworld are so grueling that her friends and family begin to worry Helen is going insane, or even dying.

Despite her failing health, Helen can’t avoid the Underworld. She is the Descender. She must wander through Hades’ world, and search for a way to stop the Furies from tormenting her family. But her strength is fading. Even a demi-god can only survive so much before the trip to the Underworld stops being a visit, and becomes permanent.

Dreamless keeps the stakes high. Helen is plagued with incestuous thoughts and tries to avoid those by falling in love with her friend Orion. However, that only brings about a love triangle. Lucas burns with jealousy, and Helen is still unable to let go of her feelings for her cousin. This book has adult themes and conversations, as well as a smattering of language and a decent amount of violence. Most violence isn’t extremely graphic, aside from the final battle, which will leave readers dying to get their hands on the third and final book in this beautifully written trilogy.

“...try to remember that dreams do come true, but they don't come easily.”  —Dreamless