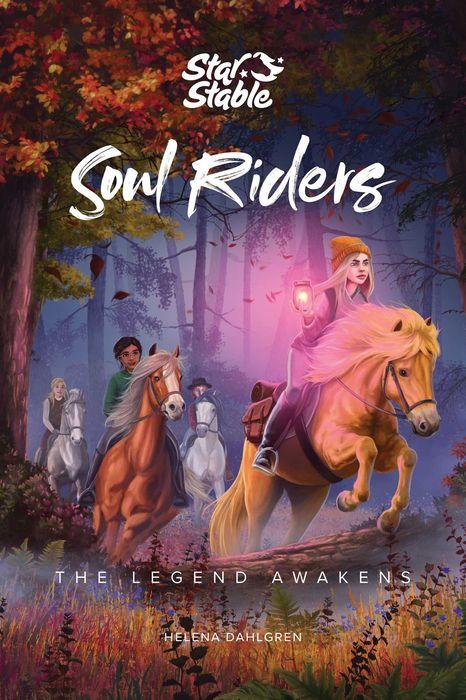 Other books by Helena Dahlgren

“There is no shame in asking for help. Especially not in our hour of need. This is an emergency,” Anne said. –Soul Riders: The Legend Awakens

According to ancient myths, when the Soul Riders and their horses are gathered together, they will be able to defeat the evil that threatens the island. But Lisa and her friends don’t quite understand this yet. And now that Lisa’s horse, Starshine, has been stolen from Jorvik Stables and her father has disappeared, there’s no time to think about old stories. Together with Alex and Linda, Lisa embarks on a dangerous journey into Jorvik’s magical landscape to save Starshine, and to find the answers they are searching for.

At the same time, Anne is on her own mission. She must find her horse, Concorde, who seems to have been transported to the strange and dangerous world of Pandoria. But someone keeps whispering dark lies into Anne’s head that make her doubt if there’s any hope at all for the four girls. . .

The Legend Awakens explores the nature of good and evil; however, after the four Soul Riders realize they have powers, they are confused as to how to use them. The girls do not understand the mythology of Jorvik, yet they are committed to defeating Garnok. Even as the girls fight Mr. Sands—who Garnok has granted eternal life—they don’t understand who Garnok is. Plus, there are several evil beings who serve Garnok, but it is unclear exactly what they are. While the magical world has some interesting elements, the character’s confusion and lack of knowledge will frustrate readers.

The adults helping the soul riders continuously remind the girls about the importance of working together. Despite this, the girls quickly go off on their own mission and lose touch with each other. The multiple viewpoints, along with the quickly changing perspectives gives the story a fast pace. However, some readers will have a difficult time keeping track of the various plot threads.

The story’s complicated plot, unexplained concepts, and lack of character development make The Legend Awakens a confusing story. Nevertheless, readers who are interested in the supernatural may enjoy The Legend Awakens. If you’re looking for an entertaining series about horses, The Legend Awakens will leave you disappointed. Horse-loving readers who want a fast-paced story that revolves around horses should add The Rose Legacy Series by Jessica Day George to their reading list.

Other books by Helena Dahlgren

“There is no shame in asking for help. Especially not in our hour of need. This is an emergency,” Anne said. –Soul Riders: The Legend Awakens