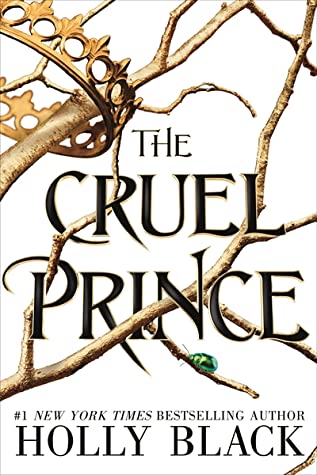 “I do not yearn to be their equal. In my heart, I yearn to best them,” Jude. –The Cruel Prince

Jude, her twin sister Taryn, and half-sister Vivi lived a normal life until their parents were murdered by Madoc, Vivi’s war general faerie father. Despite killing their parents, Madoc takes the three sisters to live with him at his estate in Faerieland. While Vivi is half-faerie, Jude and Taryn are outsiders to their new world and some of the only well-treated mortals in the land. However, being the high general’s “children” does not grant them respect. At school, Taryn and Jude find themselves the butt of many jokes and are tormented by Cardan (a faerie prince), Nicasia, Locke, and Valerian. Jude often feels powerless against the fae and is subject to their glamours and compulsions. Plus, her mortality makes her vulnerable to their cruel jokes.

However, Jude’s life begins to change when she becomes a spy for Prince Dain, Cardan’s brother and next in line to be the High King of Faerie. Given a geas by the prince, which prevents compulsion, Jude begins to stand up to Cardan and his friends. She also begins a romance with Locke, who is the only one of Cardan’s friends that had ever shown her compassion. Jude’s mortality allows her to slip into Hollow Hall (Prince Balekin’s residence; Dain’s main competition for the throne) unnoticed and gather crucial information for Dain’s cause.

At the coronation, Taryn reveals that she is to be married to Locke, shocking everyone, most notably Jude, who believed herself to be Locke’s girlfriend. While Dain is being crowned, chaos breaks out and Balekin, Dain’s brother, challenges Dain for the throne. Madoc, who is secretly working with Balekin, kills Dain, and shortly after, all of Dain’s siblings have been killed or committed suicide—except for Cardan, who is nowhere to be seen. While scrambling for shelter from the bloodshed, Jude stumbles upon Cardan, and decides to take him hostage and use him as a bargaining chip with Balekin and Madoc. While holding him hostage, Jude discovers Cardan’s reason for hating her, which is that he cannot stop thinking about her and shamefully desires her.

Jude becomes embroiled in palace intrigues and discovers her own capacity for bloodshed. But as civil war threatens to drown the Courts of Faerie in violence, Jude will need to risk her life in a dangerous alliance to save her sisters, and Faerie itself.

Told from Jude’s point of view, The Cruel Prince explores the triumph of an outsider. Although the characters feel believable, at times, it can be difficult to root for them, or even like them, because they are cruel. The novel pushes the point that cruelty only begets more cruelty, and that betrayal and ruthlessness are essential in the pursuit of power. The plot is rather complex, and the book is chock-full of events that all seem to be very important. Although some events seem superfluous at first, their relevance is revealed by the end of the novel. The dialogue, at times, can feel a little convoluted and antiquated, but this seems to fit with the holier-than-thou air of the fae. Altogether, The Cruel Prince is an engaging, fast-paced novel showcasing a strong female lead.

“I do not yearn to be their equal. In my heart, I yearn to best them,” Jude. –The Cruel Prince