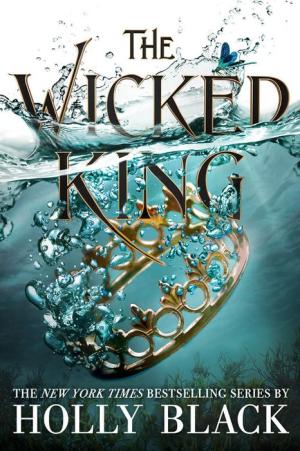 “Power is much easier to acquire than it is to hold on to,” Madoc. –The Wicked King

Jude, a mortal living in Faerieland, finds herself pulling the strings behind a puppet king she has created. With Cardan, the High King of Elhame, bound to follow her every command, Jude feels that she has finally bested the faeries who have tormented her for her entire childhood. However, she only has this control for a year and a day, and five months have already passed leaving Jude scrambling for a method to hold on to her power. It seems that the entire world is against Jude. Her twin sister, Taryn, is marrying a man who Jude dislikes, the advisory council refuses to take her word into account, and she is warned that someone that she trusts has betrayed her.

There’s an uprising occurring with the Undersea, a kingdom that had previously forged an alliance with Cardan’s dad, but that now wants independence and power. Orlagh, the Queen of the Undersea, teams up with Cardan’s brother, Balekin, who is responsible for the past king’s death. During Taryn’s wedding, the Undersea strikes, kidnapping Jude and holding her hostage. Cardan makes enormous sacrifices to bring Jude back, and the two begin to recognize that they have feelings for each other and that the intense hatred between them has faded.

Things go terribly awry when Cardan throws a party to make peace with the people whose land he sacrificed to the Undersea. Cardan is poisoned by his brother, Balekin, and Balekin tries to pin the blame on Jude. Jude and Balekin duel and Jude emerges victorious, killing Balekin. Jude and Cardan marry in secret, cementing her as the High Queen of Elfhame. However, as a punishment for Balekin’s murder, the Undersea demands that Jude be exiled to the mortal lands. Though exiled, Jude begins to hatch a plot to return home.

Told from Jude’s point of view, this fast-paced sequel to The Cruel Prince provides hidden depth to the characters, as well as develops a plot that’s full of twists and turns, with betrayal around every corner. Despite some of Jude’s questionable decisions, it seems impossible not to root for her. Jude is a strong female character that many girls will be able to relate and look up to. She doesn’t let her shortcomings stop her in her quest for power and glory. She is able to overcome every hurdle, which makes her even stronger. Although the reader is privy to her inner thoughts, she never seems to falter in her strength, which makes her a positive female role model.

Black creates a mystical, magical world that is both fantastical and terrifying, drawing the reader into the story and its world.  The book emphasizes the danger of an abundance of ambition, and how power has the ability to corrupt individuals. It also establishes a romantic relationship between Cardan and Jude that feels satisfying and believable, as the two finally begin to view themselves as equals. All of these elements come together to form an intricately woven story about power, love, and betrayal.

“Power is much easier to acquire than it is to hold on to,” Madoc. –The Wicked King