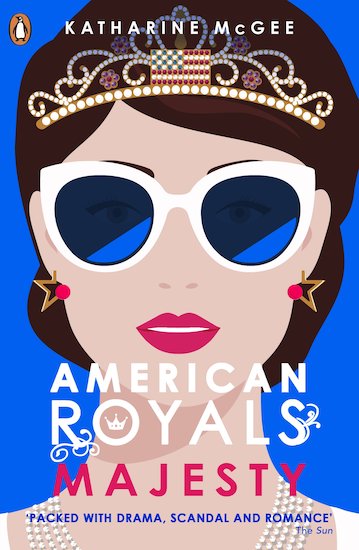 “No one wanted their future monarch to waste time playing. She was meant to be duty-bound, as plodding and obedient and steady as an ox at the plow. It was hard not to wish, sometimes, that life had cast her in a different role,” Beatrice. –Majesty

Power is intoxicating. Like first love, it leaves you breathless. One young woman is born with it. After centuries of kings on the throne, Queen Beatrice is the most powerful woman America has ever known. So why does it feel like she’s lost so much?

Her sister is born with less power. Heir, spare, whatever. The American people will always think of Princes Samantha as the part princess. So she might as well play the role, right?

Some are pulled into the Washington’s world. Nina Gonzales longs for a normal life—whatever that is. But disentangling herself from Prince Jefferson’s world isn’t as easy as she’d hoped.

And a few will claw their way in. There is only one crown that can be captured in this generation, and Daphne Deighton is determined to have it. She will take down anything—or anyone—that stands in her way.

American Royals continues the drama of the three Washington children. The story is told from multiple points of view including Beatrice, Samantha, Nina, and Daphne. Each person’s point of view is uniquely different and allows the reader to understand each person’s thoughts, which are often different than their actions. This leads to well-developed characters who are flawed and relatable.

The second and last installment of the American Royals Series focuses more on each character’s love life and less on politics. The story is full of steamy kissing scenes, heated arguments, and the confusion that comes with young love. One character’s story is like Shakespeare’s Taming of the Shrew with a modern twist. Unlike many romance novels, Majesty doesn’t end with a happy-ever-after for everyone. Instead, the book ends by showing the complicated and messy nature of love. The reader is left with this message: “real love comes from facing life together, with all its messes and surprises and joy.”

If you’ve ever wished a prince would steal your heart, American Royals: Majesty should be on your must-read list. The American Royals Series has well-developed characters, a unique premise, and several plot twists. However, if you’re looking for a book with less alcohol and sexual tension, The Selection Series by Kiera Cass would be a tamer choice.

“No one wanted their future monarch to waste time playing. She was meant to be duty-bound, as plodding and obedient and steady as an ox at the plow. It was hard not to wish, sometimes, that life had cast her in a different role,” Beatrice. –Majesty