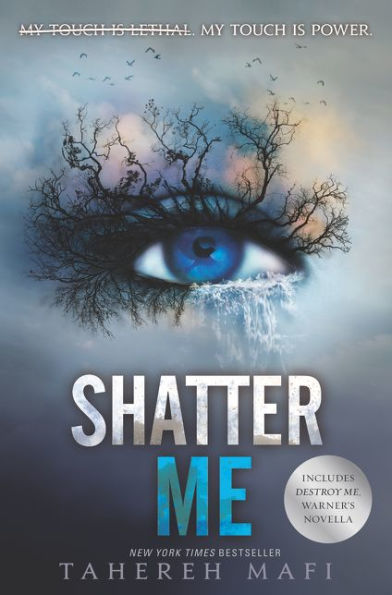 Other books by Tahereh Mafi

“Hope in this world bleeds out the barrel of a gun,” Juliette. –Shatter Me

Juliette has always been an outcast. She doesn’t understand why she is different; she just knows her touch is fatal. After being locked in solitary confinement for 264 days, Juliette is shocked when she gets a new cellmate—a boy. Adam wants to be Juliette’s friend, but she doesn’t know if she can trust him. Then, the Reestablishment takes both her and Adam to a new facility.

The Reestablishment has plans for Juliette. Plans to use her as a weapon. Juliette doesn’t want to hurt anyone. Even though Juliette is still a prisoner, she is discovering the strength to fight back. She wants to have a future. With Adam by her side, Juliette plans her escape. When the time is right, will Juliette be able to escape the Reestablishment? Will Adam lead her to a better life, or does he have plans to betray her?

old from Juliette’s point of view, the story focuses on her thoughts and feelings. However, her thought process is often hard to understand as her thoughts are often described using figurative language. There is also no clear transition between her thoughts and what is actually happening in the story, meaning readers may have to go back and reread some scenes to make sure they understand the text.

The story has an interesting premise, but readers will have a difficult time suspending their disbelief. The story never explains why Juliette’s touch is lethal. Since Juliette’s touch is only lethal when her skin touches someone else’s skin, it is hard to imagine that no one has given Juliette a pair of gloves. Instead of helping Juliet protect others, her parents moved around after each disaster. When Juliette accidentally causes the death of a little boy, she is sent to prison and placed in an isolation cell. Once she is placed in the care of the Reestablishment, her main captor always wears gloves to protect himself. If her captor came up with the simple solution of gloves, why didn’t anyone else?

Juliette soon discovers that both Adam and her captor are immune to her touch. Since Juliette revels in the ability to simply touch another person, Juliette and Adam share steamy kisses between the high-action scenes. Although the plot is hard to believe, fans of dystopian stories will enjoy the unique characters as well as the battle of good versus evil. Full of suspense and surprises, Shatter Me is an action-packed story with plenty of steamy scenes. Readers will want to jump into the next book, Ignite Me, to see if Juliette finds freedom or just a different type of prison.

Other books by Tahereh Mafi

“Hope in this world bleeds out the barrel of a gun,” Juliette. –Shatter Me