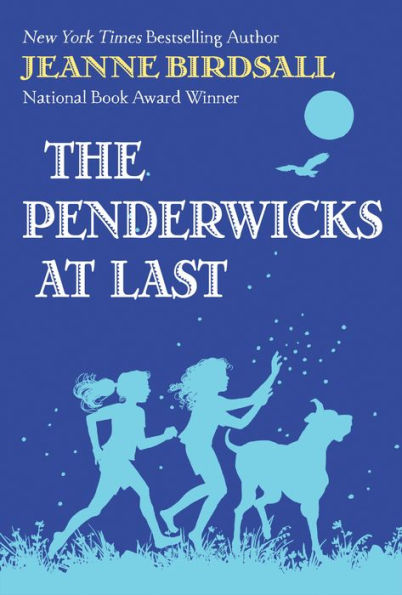 “Good job Lydia, my dancing elf. And I hope I don’t have to walk you down the aisle again for another few decades,” Mr. Penderwick. —The Penderwicks at Last

The Penderwicks at Last

The Penderwicks are back for the final installment of Jeanne Birdsall’s beloved series about family, friendship, and adventure. The entire family is coming together once again for a wedding, and it just so happens to be at their favorite place in the world, the Arundel estate. Lydia, the youngest Penderwick sister, is now eleven years old and is a boundless ball of dancing energy, excited to experience the wonderful place that she has heard so many stories about. New surprises await as the charming family returns to the estate where it all began.

Following the same simple, yet charming style of the first four books, The Penderwicks at Last is a delightful read. However, it is the least interesting of the series. Although it has the trademark humor and wonder that captivated readers from the beginning, this book tends to drag and lose momentum. Curious readers excited to discover the fate of the family that they have grown to love may find that part of the magic has faded.

The best elements of the book include when Lydia interacts with her family, rather than what the majority of the book focuses on–her relationship with her new friend Alice. As Lydia becomes a better person over the course of her stay at the enormous estate, she learns important lessons about kindness, friendship, and familial bonds.

The story revolves around Lydia as she navigates and discovers Arundel for the first time. She begins to understand the secrets of what makes the Berkshire estate so magical to her family, from the gardens to the rolling fields, allowing the reader to feel the wonder and excitement along with her. Since Lydia was only in the last two books of the series, she is less fascinating than her siblings are. Readers willing to overlook this will find it an enjoyable tale of weddings, space alien movies, and new friendships.

Although The Penderwicks at Last can be read as a stand-alone novel, readers will find the story more amusing if they have read the previous books. Younger readers may find the diction difficult and may not be interested in the older characters and their adult problems.

Despite disappointments for long-time fans of the series, Birdsall uses her trademark style to create a story that is still pleasant to read. Mimicking the mood and story arc of Louisa May Alcott’s Little Women, The Penderwicks at Last is a feel-good story for readers of all ages.