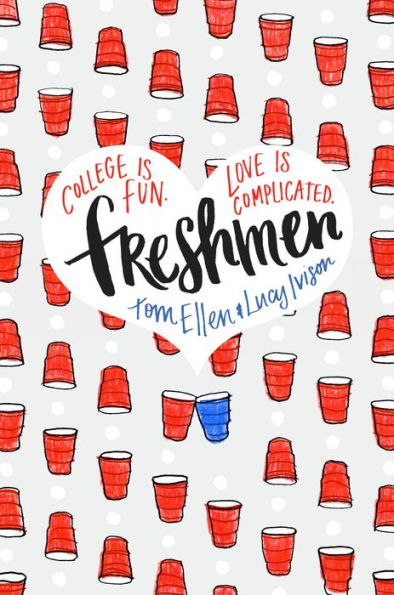 “Who knows, maybe Luke Taylor would turn out to be the love of my life, but in order to ascertain that I would have to actually get to know him first and pay real attention this time,” Phoebe. –Freshmen

by Tom Ellen and Lucy Ivison

Although initially nervous about making new friends during her university’s Frosh Week, Phoebe quickly befriends her roommate, Negin, and a girl named Frankie. As she settles into college, everything seems to be going smoothly until she bumps into her high school crush, Luke Taylor, at a party. Phoebe’s heart skips a beat as she realizes this is her chance to capture Luke’s heart.

Luke never noticed Phoebe in high school. Now that he’s no longer with his long-term girlfriend, Abby Baker, college has given him a whole new view. Taken in by Phoebe’s amazing smile, curly locks, and naïve optimism, Luke falls hard for Phoebe. Then, the “Wall of Shame” is exposed—a text chain created by Luke’s college soccer team where some of the members take photos of girls they slept with and rate them on a scale of 1 to 10 – and Abby unexpectedly comes back into Luke’s life. Is Luke truly the “perfect man” for Phoebe, or is he just another misogynistic jock?

With its cast of crazy characters, Ellen and Ivison create a funny story that addresses many of the problems modern-day teens face, such as cyberbullying, self-doubt, and relationships. As the story develops, both Luke’s and Phoebe’s points of view become relatable and realistic. Readers will understand Luke as he struggles with his feelings for Phoebe and Abby, and will empathize with Phoebe as she struggles to make it through her first year of college.

Along with Luke and Phoebe, Freshmen contains a cast of characters which embody every aspect of college life – there’s Arthur Watling (the pot-smoking roommate), Frankie (the ridiculously tall and funny girl that cannot seem to find a man), Josh (the cake-eating sidekick), and Will (the misogynist jock). Readers will fall in love with these realistic characters and root for them as they live through the many ups and downs of college life.

Freshmen starts off slow and takes its time developing the characters; however, once the plot picks up speed, readers will have a hard time putting it down. Ellen and Ivison push the limits of young adult fiction. During Frosh Week, the characters drink like soldiers and only put down their drinks so they can make out and have sex. They constantly attend classes hungover and live in absolute party pigsties. This book is intended for older readers, those preferably attending college, and has no real moral lesson. Nonetheless, it is a funny book that deals with problems young adults face in college.

“Who knows, maybe Luke Taylor would turn out to be the love of my life, but in order to ascertain that I would have to actually get to know him first and pay real attention this time,” Phoebe. –Freshmen