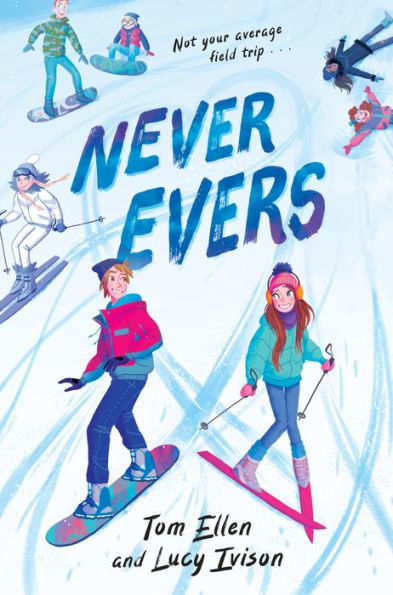 “My mum always says you should think of boys as spiders. They’re more scared of us than we are of them,” Keira. –Never Evers

Thirteen-year-old Mouse is pretty sure her life is totally over. Now that she’s been kicked out of ballet school, she has to go on her new school’s ski trip basically knowing no one. Well, except too-cool-for-school Keira and crazy Connie-May (and her adorable hamster, Mr. Jambon).

Meanwhile, Jack’s life is just about to begin. He’s on the way to the slopes with his school too, and all he can think about is how to get his first kiss.

With her new friends by her side, Mouse has more fun skiing and building igloos than she expected. And when Jack catches Mouse’s eye, he’s smitten. All’s well—that is, until mega-pop star, Roland arrives on the scene and sets his sights on Mouse too! A week in the snow is about to get complicated. . .

Never Evers is ridiculous, over the top, and funny. The story focuses on two friend groups. One group includes three boys—Jack, Max, and Toddy. Max is totally obsessed with kissing a girl—any “hot” girl. Even though Jack is smitten with Mouse, Max keeps pushing Jack to spend time with another hot girl, which causes some drama. Like many preteen boys, the three friends are immature, use body humor, and talk about “pubes” (pubic hair).

The other friend group includes Mouse, Connie, and Kiera. In order to determine if Jack likes Mouse, the girls make a love spell, which causes some laughable moments. However, unlike the group of boys, the girls are not obsessed with boys. Instead, Mouse is also dealing with getting kicked out of dance school, a mean girl, and making new friends.

Never Evers is full of friendship drama, crushes, jealousy, and misunderstandings. The story’s point of view flip flops between Jack and Mouse, which allows the reader to understand their confusion about the opposite sex. Using humor, the story expertly portrays the confusion and insecurity that many tweens feel about growing up. While the story is often laugh-out-loud funny, it also shows the importance of kindness and having friends who will stand by you no matter what.

While Never Evers is not great literature, it will resonate with tweens who often feel awkward and uncertain. Middle school readers who aren’t ready for more mature romances will enjoy Never Evers. If you’re looking for a similar tween-friendly romance, add Pugs and Kisses by J.J. Howard to your reading list.

“My mum always says you should think of boys as spiders. They’re more scared of us than we are of them,” Keira. –Never Evers