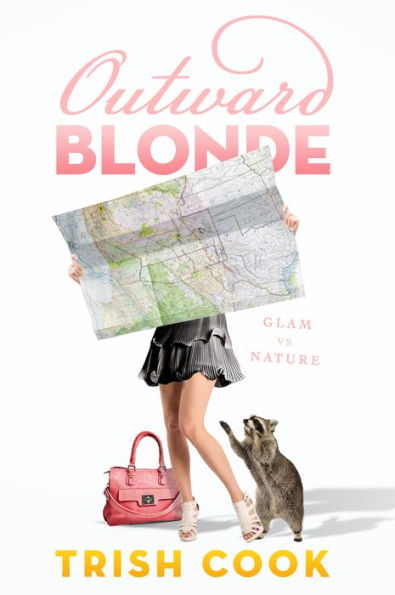 “It occurs to me that most of the things that scare me in the middle of the night—Ursula, Eyeballs, living in a cardboard box—are probably not the things I need to worry about at all,” Lizzie.               —Outward Blonde

Sixteen-year-old Lizzie wants to forget the father who abandoned her and the mother who lives in a drug-induced fog. She spends her time shopping and partying with her best friend. One of Lizzie’s drunken escapades is caught on camera, and her bad behavior is shared with gossip sites.

Lizzie’s mother wants to make sure Lizzie doesn’t cause the family any more scandal, while her father wants her to get help. So in the middle of the night, two strangers whisk her away to Camp Smiley, a gritty wilderness survival program for troubled teens. Lizzie’s only goal is to escape. She doesn’t think she has anything in common with the other teen campers, and she has no desire to deal with her own demons. Will Lizzie escape back into her party life or will Camp Smiley be able to turn around this troubled teen?

Portrayed as a typical rich girl, Lizzie believes money can get her out of any situation. Lizzie’s only life goal is to shop and party. This spoiled, snotty rich girl spends much of her time whining—about her parents, the campers, the conditions of the camp, and everything in between. Even though Lizzie is portrayed as a wild, boy-crazy girl at the beginning of the book, Lizzie later gets upset that others think she is sexually active when she is still a virgin. The inconsistencies in Lizzie’s character are one reason Lizzie is a difficult character to care about.

Other characters are difficult to connect with as well. The camp staff is stereotypical; such as the ex-military camp director, who doesn’t think Lizzie can complete the program. Lizzie’s parents are also portrayed in an unrealistic, stereotypical manner. At one point, Lizzie’s dad says “and rather than allowing you to fall into the depths of despair, we’re sending you to a place where you can reconnect with the light inside you and find greater meaning in life.”

Although there are some funny scenes, much of the plot seems unrealistic. For example, when Lizzie and the other campers run away, a random stranger picks them up, takes them to his store to exchange their camp uniforms for clothes, and drives them to Vegas. Ultimately, too much time in this book is focused on Lizzie’s escape plan and partying, and not enough time is spent on her dealing with her issues.

The diverse cast of characters deals with some serious issues, including understanding one’s sexuality, gambling, bullying, and addiction. Outward Blonde has a lighthearted tone and shows readers the importance of forgiveness, accepting yourself, and helping others.

“It occurs to me that most of the things that scare me in the middle of the night—Ursula, Eyeballs, living in a cardboard box—are probably not the things I need to worry about at all,” Lizzie.               —Outward Blonde