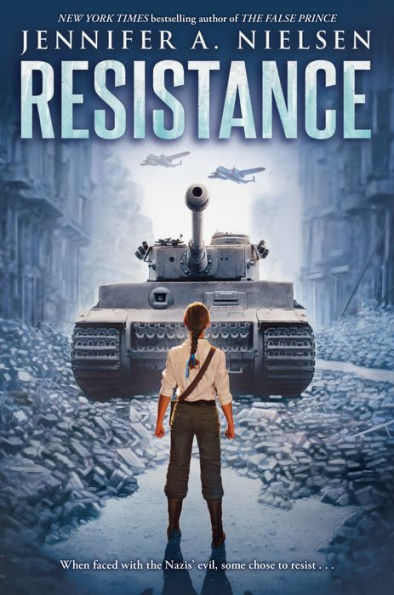 by Jennifer A. Nielsen

Chaya Linder is living in Nazi-occupied Poland. Her Jewish family is in danger. Her sister is deported to one of the camps and her brother disappears. After losing their two children, Chaya’s parents have given up hope. In an effort to make a difference, Chaya becomes a courier and travels between the ghettos of Poland. She takes lifesaving supplies like forged papers and food. Sometimes, she even smuggles out children.

When Chaya joins a resistance cell, she hopes to use the Nazis’ supplies to help her people. When a mission goes wrong, most of Chaya’s network is killed or captured. Alone, with nowhere to go, Chaya isn’t sure what to do. When Esther, a former member of her cell, appears, Chaya begins a journey to the Warsaw Ghetto where a large uprising is being planned. Chaya is determined to save as many lives as possible, even if she loses her own life. Her only desire is to live or die with honor.

Told from Chaya’s point of view, Resistance gives the reader a grim picture of the persecution Jews received during World War II. The story begins with suspense, which continually builds as Chaya survives her ordeals, while many of the other resistance members are killed. Many of the events are violent, and although they are not described in bloody detail, death is common. Although the publisher recommends the book for ages 8-12, the descriptions of death and torture would make this a difficult book for younger readers.

As Chaya’s world crumbles around her, the reader gets a better understanding of why some Jews did not fight back. Some of the Jewish people were so overcome by fear, or some didn’t believe the stories of the death camps, so they didn’t fight back. Others refused to fight because they believed that killing was wrong—even if they were fighting to save their own life. Several times in the story, the characters discuss the morality of killing the Nazi soldiers. In the end, the story makes it clear that leaving the Ghetto in order to survive, or staying in the Ghetto are both valid choices. “We’ll all die one day, no one escapes that fate. Our only decision is how we live before that day comes. Our path requires courage, but so does theirs. Both paths are ways to resist.”

As Chaya and Esther travel to Warsaw, they meet people from all lifestyles and religions. This helps the reader understand people’s different responses to the Jews. Some of the Poles ignored the problem, while others took advantage of the Jewish people, and even physically attacked them. Yet, there were still many Poles that risked their lives to help save the Jews. In the end, the story shows that there were evil people as well as good people who were willing to die fighting.

Resistance ends with the events of the Warsaw Uprising, which gives the reader a vivid description of the death of many civilians, and resistance fighters. The cruelty of the Nazis and the heroic deeds of the Jews are depicted. Although the story gives a historic perspective, sensitive readers may be upset by the death the surrounds Chaya and the Jewish people. Resistance ends with a list of the historical resistance fighters who fought for their people and should be considered heroes.