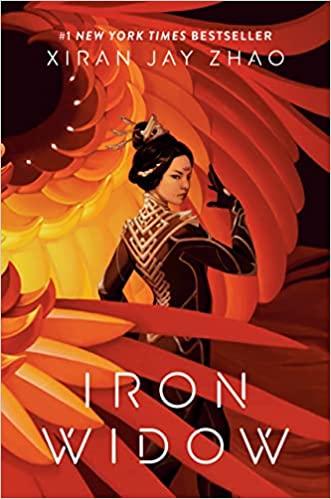 “Despite their best efforts, I find myself worthy of happiness,” Zetian. —Iron Widow

The boys of Huaxia dream of pairing up with girls to pilot Chrysalises, giant transforming robots that can battle the mecha aliens that lurk beyond the Great Wall. It doesn’t matter that the girls often die from the mental strain.

When 18-year-old Zetian offers herself up as a concubine-pilot, it’s to assassinate the ace male pilot responsible for her sister’s death. But she gets her vengeance in a way nobody expects—she kills him through the psychic link between pilots and emerges from the cockpit unscathed. She is labeled an Iron Widow, a much-feared and much-silenced kind of female pilot who can sacrifice boys to power up Chrysalises instead.​

To tame her unnerving, yet invaluable mental strength, she is paired up with Li Shimin, the strongest and most controversial male pilot in Huaxia​. But now that Zetian has had a taste of power, she will not cower so easily. She will miss no opportunity to leverage their combined might and infamy to survive attempt after attempt on her life, until she can figure out exactly why the pilot system works in its misogynistic way—and stop more girls from being sacrificed.

Iron Widow is not only about Zetian avenging her sister’s death, but about showing girls that they can—and should—grow up to be more than just a sacrifice for the advancement of men, and to aspire to be something more than the perfect subservient. Zetian faces very complex problems, in which she is constantly forced to choose between what is safe for her as a woman and what is fair to her as a human. Zetian is a powerhouse, who is a bit hotheaded, but she is extremely justice oriented. She balances power, strength, and the desire for companionship throughout the duration of the story. Though she is extreme in her actions, she is relatable in her thoughts; she is a strong-willed, independent girl that will stop at nothing to release herself and other women in her world from the shackles of the system that holds them back. She handles things violently and with no regard for consequences, but in her world, it’s her only option. Iron Widow is written from the perspective of such an intense, passionate character that it’s impossible not to root for her from start to finish.

Xiran Jay Zhao successfully writes a strong female lead who doesn’t yield to anyone or anything. Unlike most protagonists, Zetian is not worried about fighting fair, she’s focused on fighting to win. She campaigns ruthlessly for her own freedom, though she is often faced with painful and terrifying consequences for both her and her family. Zetian is merciless to those who have shown her no mercy, whereas traditional female roles may have been forgiving. She is ruthless in her pursuit of liberation for the women of her world and does not draw moral “lines” that she will not cross, which allows her to fight the system that has held her down simply because she was born a girl. Plus, she is not worried about who is caught in the crossfire. Zetian is violent in a way that only traditional male characters have been allowed to be, which may be shocking to some readers.

Iron Widow is a violent science fiction book. It is set during a tumultuous time and features people who are very rough around the edges, so both the fight scenes and the inner dialogue of the protagonist are often brutal and unforgiving. However, because the nature of the fighting style, the scenes are not overly gory or upsetting. Most of the combat takes place using spirit power known as “Qi,” so when an enemy is killed it is often described as a kind of disappearing process which eliminates bloody and grotesque scenes. There are several depictions of murder, torture, and abuse woven in that may upset sensitive readers.

The main theme of Iron Widow is anger against the oppression of women. This creates an emotionally charged story. Zetian is angry from start to finish, and the subject of her hate changes every few chapters. Her anger is justified and makes Iron Widow refreshing to read. Iron Widow will appeal to readers who enjoy futuristic fantasy novels with epic battles and anti-heroes.

“Despite their best efforts, I find myself worthy of happiness,” Zetian. —Iron Widow