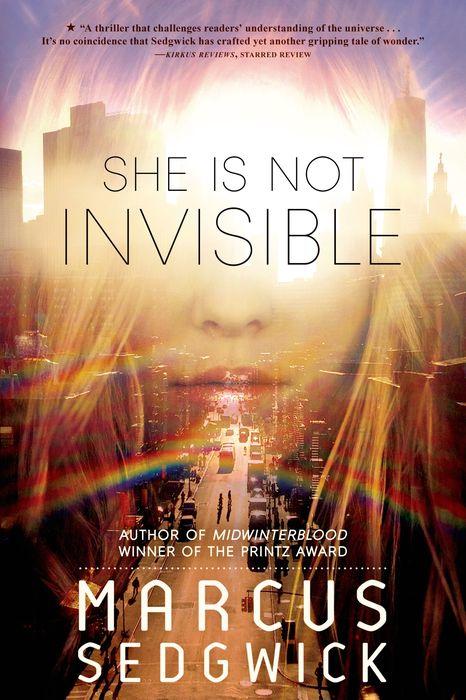 “Learn something the hard way and you won’t forget it,” Mum. –She is Not Invisible

Laureth Peak’s father has taught her to look for recurring events, patterns, and numbers—a skill at which she’s remarkably talented. When he goes missing while researching coincidence for a new book, Laureth and her younger brother fly from London to New York and must unravel a series of cryptic messages and frightening clues to find him. The complication: Laureth is blind. Reliant on her other senses and on her brother to survive, Laureth finds that rescuing her father and spotting the extraordinary, and sometimes dangerous, connections in a world full of darkness will take all her skill.

Laureth, a sixteen-year-old blind protagonist, desperately wants to find her father. Laureth’s experiences highlight the difficulties she faces because she is blind. Because of her disability, Laureth takes her seven-year-old brother, Benjamin, to New York to look for her father. The sister-brother relationship is sweet, and it allows the reader to see the different ways Laureth and Benjamin communicate, which allows Laureth to navigate without making her blindness apparent.

While looking for her father, Laureth finds his notebook that has his research notes about coincidences, patterns of the universe, and scientists’ research. For example, he ruminates about the mathematical probability that coincidences happen, synchronicity, as well as some scientists’ obsessions with a meaningful number. The excerpts from the notebook are incredibly boring and they slow down the plot. In the end, Laureth’s father decides to dump all his research and resume writing the same type of funny stories that made him famous. There seems to be no point to the tedious passages about coincidences.

While She is Not Invisible is unique because it focuses on a smart, blind protagonist, Laureth’s story lacks believability. For example, a blind teenager and a seven-year-old boy would not be able to navigate the streets of New York alone. The story concludes with Laureth’s family reuniting, but in the end, none of the clues that Laureth follows help her find her father. Instead, her father just miraculously appears in the hotel’s stairwell just when Laureth needs him most. The conclusion is anticlimactic, and all the pieces of the puzzle come together too easily.

Many teen readers will relate to Laureth, who often doubts herself. Along the journey, she gains confidence and comes to realize that “no one should want to be invisible. To have no one notice you or speak to you. That would be really lonely, in the end.” If you’re looking for a compelling mystery that will be hard to put down, forego reading She is Not Invisible and instead grab a copy of Six Months Later by Natalie D. Richards.

“Learn something the hard way and you won’t forget it,” Mum. –She is Not Invisible