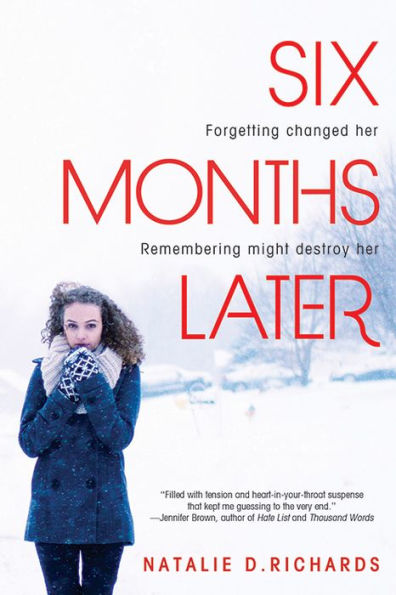 “It is 10:38 on a school night, and a juvenile delinquent is preparing to sneak into my house. This is not my life,” Chloe. –Six Months Later

In May, Chloe fell asleep in study hall. When she wakes up, snow covers the ground, and she can’t remember the last six months of her life. In the six months she can’t remember, her life has been transformed. Before, she was a struggling student, and college was out of her reach. She also had a hopeless crush on popular jock Blake. Now, Chloe’s SAT scores have given her a chance to attend a top college, and Blake is her boyfriend.

Instead of being disapproving, her mother smiles at her. Instead of hiding a crush, the boy of her dreams is in her arms. Instead of sharing her secrets with her best friend Maggie, Maggie won’t even look at her. Instead of feeling thrilled when Blake wraps his arms around Chloe, she feels revolted. How can Chloe figure out what happened to her? As she looks for the truth, Chloe realizes that remembering the past comes with hidden dangers.

The mystery behind Chloe’s new world will draw the reader in as they follow Chloe’s attempt to discover how she changed so much in just six months. The mystery will capture readers’ attention, but they will keep turning the pages because Chloe is a relatable character who struggles to understand who she is. Chloe and her mother have a turbulent relationship, and although Chloe wants to make her mother proud, she isn’t sure if that is even possible. Teens will understand Chloe’s parental dilemma. Even though Chloe loves her parents, her life’s path cannot be carved out by them.

Six Months Later isn’t just a great mystery, it also has hot romantic scenes. Now that Blake is Chloe’s boyfriend, she doesn’t understand why kissing him feels so wrong. And even though Chloe doesn’t ever remember talking to bad boy Adam, when she looks at him she knows that there is something there. Although a love triangle isn’t a new concept, Six Months Later perfectly weaves the love triangle into the mystery.

With relatable teen conflict, a unique mystery, and a peculiar love interest, Six Months Later will keep readers guessing until the very end. As Chloe unravels the past, she realizes that people’s motives are often complicated and misunderstood. This book will entertain as well as teach about the importance of forgiveness. Six Months Later is a fast-paced story with likable characters that will keep readers up late into the night.

“It is 10:38 on a school night, and a juvenile delinquent is preparing to sneak into my house. This is not my life,” Chloe. –Six Months Later