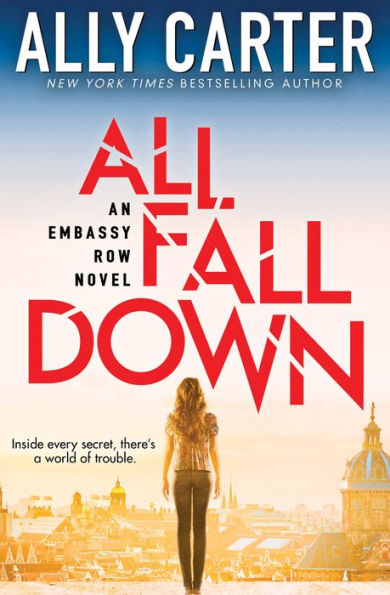 “Friends help each other when they are . . . you know . . . going up against international hitmen and stuff,” Noah. –All Fall Down

Three years after her mother’s death, Grace is sent to live with her grandfather, a powerful ambassador who is too busy to spend any time with her. Thrust into a new situation, Grace isn’t sure who to trust. Grace has never been close to her childhood companion, Megan, and wonders why she would want to help her. Her new friend Noah claims to want to be her best friend. Her brother’s best friend Alexei says he’s watching out for her out of obligation. Are they really her friends or do they have other motivations for staying close to Grace?

Grace wants to keep out all thoughts of her mother’s death, but visions of her mother keep appearing.  While Grace’s grandfather wants her to put on a pretty dress and attend functions at his side, Grace doesn’t seem to be able to stay out of trouble. When the mysterious Scared Man from her past appears, Grace overhears his plans to kill. Convinced that the Scared Man is responsible for killing her mother, Grace goes on a mission to stop him from killing again.

Grace narrates her own story, which allows the reader to see into her troubled mind and understand her terror. Grace believes that others think she is crazy because she witnessed her mother’s death; despite appearing completely normal, she struggles with panic attacks and visions of her mother. Grace saw her mother being shot in the chest, so why does everyone say the death was an accident?

Full of suspense, interesting characters, and plot twists, All Fall Down is an entertaining story that will leave the reader reaching for the next book in the series. For those who enjoyed the Gallagher Girls series, All Fall Down will not disappoint. However, All Fall Down has a more serious tone with more violence. Although the violence is not described in gory detail and is appropriate for younger audiences, Grace’s mother’s death is described in a detailed flashback. Even though the book is written for readers as young as twelve, as the series progresses there are some readers that will not be ready for the more mature themes.

“Friends help each other when they are . . . you know . . . going up against international hitmen and stuff,” Noah. –All Fall Down