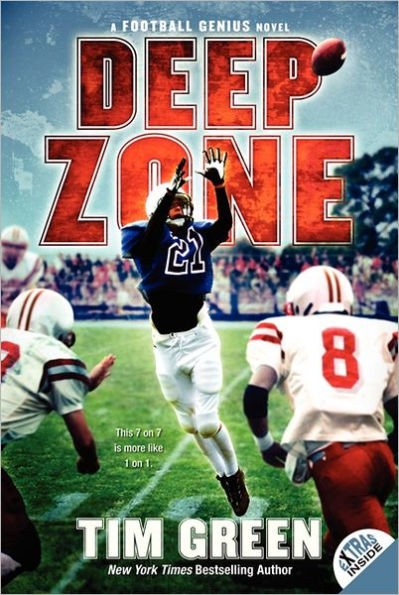 “Football is a game of comebacks, and a game of character,” Coach Bavaro. — Deep Zone

Ty just made the team that will play the seven-on-seven tournament for middle-school athletes, coached by former NFL star Mark Bavaro. If his brother Thane’s NFL team makes it to the Super Bowl, they would be living their football dream: both brothers playing for a championship game in one weekend. Unfortunately, Thane injures his knee in a game and is out for the season. Still, Thane supports Ty as they travel to Miami with Ty’s team. There, Ty meets Troy, another football player his age who has an uncanny knack for guessing which way Ty will run. Will Ty be able to outsmart Troy in the championship game?

In addition to football, Ty has other worries. Ty is visited by Agent Sutherland, who is assigned to protect him and Thane from the mob. Last season, Ty accidentally gave the mob inside information so they could bet on who would win the Super Bowl. Now, two mobsters are loose and may have Ty marked as a target.

Football fans will appreciate the large amount of football terminology, descriptive game scenes, and discussions of strategies. Ty and Thane have a great relationship, and readers will be impressed by all the things they get to do as a result of Thane being in the NFL, such as riding in limousines and going to exclusive parties. While the lavish lifestyle is realistic, these scenes do not help advance the plot and make it difficult to relate to the characters.

Even though the mobsters add mystery to the plot, they are completely inept and do little to make the main characters shine. Unfortunately, Ty is not very relatable because he is one-dimensional. However, he has a couple of positive personality traits, such as being caring and hardworking. The story can drag at times, and although satisfying, the climax doesn’t come until the very end of the book. Deep Zone is a book for football fans looking for an easy read.

Even though the publisher recommends Deep Zone for readers as young as eight years old, there are scary scenes, such as Ty and Troy being kidnapped by mobsters. Deep Zone is the last book in the five-book Football Genius series. The books follow Ty and Troy’s stories separately, and they meet in Deep Zone. Although Tim Green summarizes the story thus far so readers can understand Deep Zone, reading the previous four books would make the plot easier to understand.

“Football is a game of comebacks, and a game of character,” Coach Bavaro. — Deep Zone