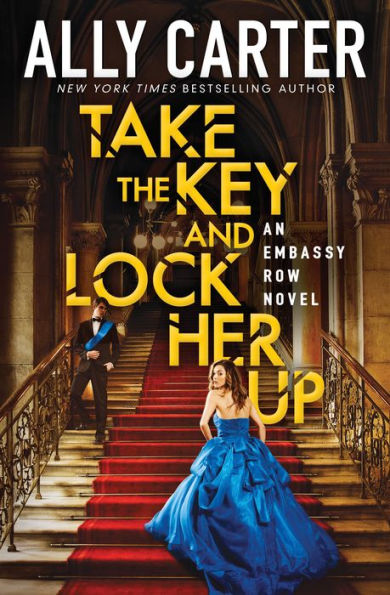 Take the Key and Lock Her Up

Death is no stranger to the royal family of Adria. Centuries ago, the royal family was murdered, which changed the political landscape of Adri. However, the infant princess survived and was hidden; those who hid the child wanted her to take her rightful place as queen. Now, two hundred years later, there are still some that believe the princess’ descendent should sit on the throne.

Grace discovers that the princess’s blood runs through her veins. If people find out that Grace is a lost princess, the news could spark a revolution. Some people want to use Grace as a pawn, others want to silence her forever. Grace must figure out a way to save herself and the people she loves. Danger and deceit hide around every corner, and if Grace fails, she will pay with her life.

Take the Key and Lock Her Up is the exciting conclusion to the Embassy Row trilogy. The third book in the series ramps up the suspense because Grace isn’t sure who wants to help her and who wants to kill her. The romance heats up, but the kissing scenes are tame and appropriate for younger readers. Even though the book is written for readers as young as twelve, there are some readers that will not be ready for the more mature themes. For younger readers, the content may be disturbing because there are several scenes that focus on a mental institution and how the drugs affect the patients. In addition, Take the Key and Lock Her Up has more violence than the first two books because there are several factions that want Grace dead. The ending of the story is a bit predictable, but that doesn’t detract from the story’s enjoyment.